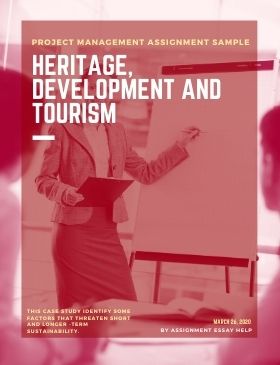 Where you think greater efforts need to be made to enhance sustainability through addressing heritage, social development and tourism agendas. Briefly introduce your case study and identify some factors that threaten short and longer -term sustainability. Outline the measures that you think are needed to address these risks in order to enhance sustainability, conserve heritage values and enhance social development. Make sure you explain why your recommendations are relevant and backed up by research.

One of the Malaysia’s pioneering projects in the field of sustainability is the Sustainable Penang Initiative (SPI),  is formed so as to address the challenges of sustainable development via initiation of the popular consultations among the stakeholders, establishment of the community indicators and then challenging the input given to the strategic development planning of the state.  The state of Penang is one of the smallest states among the thirteen states of Malaysia and its total area is about 1,031 square kilometers. Though the Penang states comprise of about 293 square kilometers, it contains a very diverse ecosystem which comprises of the hills, forests, forests in the coastal areas and mangrove regions. Most of the landscape in the region has been transformed into urban and pre-urban and due to the crisscrossed network of roads, there is a severe crisis being faced by the island (Bell, 2013). George Town is one of the most historic towns in the Penang state and it is also the capital of Penang. The urban history of the town is spanned for around 200 years. Other than being the administrative and the commercial capital of the state it is also the historic and the spiritual center in the state. There are historic row houses found in this region along with the more spacious and the leafy green suburbs of the urban middle and the upper class.
There are various unique challenges and the opportunities that are being provided by the state of Penang which is related to the sustainability of the region; these challenges and the opportunities are highlighted as follows:

i) This region has a very fragile eco-system which comprise of the major coastlines, hill lands, forest areas and the major threats which are being posed to the quality of the water and the air.

iii) The society of the region is the multi-ethnic and multi-cultural society which has developed the heritage of tolerance, respect, and co-operation.