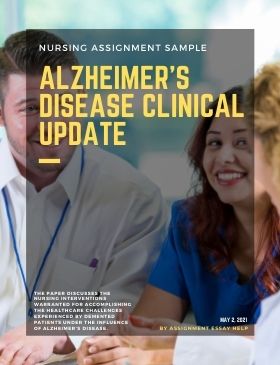 This assignment is an 1800 word clinical update on one of the topics below.

When you submit your file, please ensure your “Submission Title” on the Submit Turnitin Assignment page contains the topic title, eg.“Chronic Heart Failure” or “Tuberculosis”.  Nothing else is required for the title.

Alzheimer’s disease predominantly leads to the pattern of dementia and memory impairment among elderly individuals (Mayeux & Stern, 2012). This disease is manifested with the progressive cognitive deterioration that eventually leads to the decline in intellectual functions of the affected patients. The clinical findings in (Ashby-Mitchell, Burns, Shaw, & Anstey, 2017) reveal 48.4% of dementia cases (in the Australian subcontinent) emanating from the pattern of modifiable risk factors. These modifiable risk factors include the co-morbid states attributing to depression, hypertension, diabetes mellitus, educational deprivation, smoking, lack of physical activity and obesity experienced by the predisposed individuals. Findings in evidence-based research literature reveal the pattern of mild cognitive impairment manifested by Alzheimer’s disease in elderly patients (Roberts & Knopman, 2013). The analysis presented by (Qiu, Kivipelto, & Strauss, 2009) reveals the world-wide occurrence of Alzheimer’s disease among 25 million demented patients. Indeed, only 2-5% of the Alzheimer’s patients acquire the disease under the influence of autosomal dominant mutations. This clinical update effectively presents the aetiology, Pathogenesis, clinical manifestations, diagnostic processes and treatment interventions in relation to the pattern of Alzheimer’s disease and its clinical manifestations. The paper also discusses the nursing interventions warranted for accomplishing the healthcare challenges experienced by demented patients under the influence of Alzheimer’s disease.

Alzheimer’s disease is a multifactorial condition that develops under the influence of environmental and genetic factors that interact with each other for increasing the allostatic load of predisposed individuals (Armstrong, 2013). This disease is manifested by the gradual degeneration of blood vessels and neurons that lead to the generation of reactive proteins like tau and β-amyloid (Aβ). The genetic predisposition of individuals adversely influences the process of neuronal degeneration that leads to the onset and establishment of familial Alzheimer’s disease. The aggregation of tau and Aβ proteins in the human brain results in the development of disease heterogeneity in the patients affected with Alzheimer’s disease. The disruption in tau configuration adversely affects its systematic binding with microtubules as well as redistribution across distal dendrites and neuronal cytoplasm (Kasper, et al., 2015). This results in the development of vascular pathology and functional deterioration among AD patients.

Indeed, dementia is the preliminary characteristic of Alzheimer’s disease that leads to a gradual and sustained decline in patient’s memory over the course of time. AD manifestations affect the mesial temporal lobes that lead to the development of memory loss (Lemolo, et al., 2009). The accumulation of Aβ proteins assists in the induction of receptors that mediate the localisation of microglial cells in the human brain. This process occurs under the influence of inflammatory factors induced by the ageing mechanism that eventually leads to the development of clinical manifestations in the AD patients (Wyss-Coray & Rogers, 2012). Indeed, with the gradual increase in the Aβ proteins, the synapses and neurons experience deleterious manifestations that eventually lead to their degeneration and death that adversely influence activities of daily living of the affected AD patients (Niedowicz, Nelson, & Murphy, 2011). Alzheimer’s disease influence the medial temporal lobes of the human brain in terms of atrophy that extends further and affects the lateral frontal cortex, temporal lobes as well as medial parietal and lateral lobes (Kasper, et al., 2015). Furthermore, the Pathogenesis of AD includes the development of neuritic plaques that substantially contain neurofibrillary triangles and Aβ proteins. The pre-existence of Apolipoprotein e-4 is responsible for the high predisposition of individuals towards the acquisition of AD and its associated manifestations. The accumulation of oligomers and Aβ proteins in the AD patients leads to deterioration of their cellular function and development of amyloid angiopathy.

Patients affected with the pattern of Down’s syndrome experience high predisposition towards the development of progressive dementia under the influence of Alzheimer’s disease. The hyperactivation of TERM-2 gene leads to the inflammation of brain cells that elevates the risk of AD development in the affected patients.