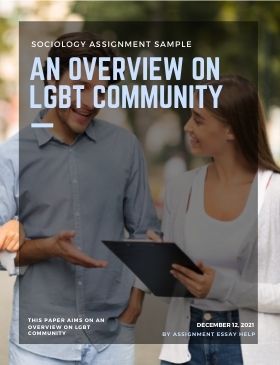 Write an overview on the LGBT Community.

I have chosen LGBT or Lesbian, Gay, Bisexual, and Transgender community for discussing in detail in this reflective essay The LGBT community that often referred as gay community as well can be loosely defined as a collection of groups of lesbian, gay, bisexual, and transgender, as well as supporting people, organizations, of LGBT rights. In one hand, considering that the LGBT community is striving for an equal identity for themselves, we should consider this community as an ‘identity-based community. On the other hand, as the formation community is also an outrage towards the issue of societal oppression and exclusion of LGBT people from the mainstream, this can also be marked as an ‘Issue-based community’ solely promoting LGBT right in various part of the world.

As LGBT people can be found everywhere in different stages of life, groups such as gay villages, LGBT rights organizations, LGBT student groups in schools and universities, LGBT groups of an employee at companies, and religious LGBT groups can be considered broadly part of this community (Gates, 2011). However, as it is mostly an identity based or an issue based community, every LGBT person may not be part of the community by default, rather this community can be considered as a collection of people who want to advocate for LGBT rights and equal treatment of them in all social places. Although LGBT communities generally try to remain beyond any political or religious affiliation, solely because their struggle is against the nation-state or religious organizations, there are a few instances where these communities possess direct affiliation as well. Like many other communities, LGBT community also possesses various symbols for denoting themselves, among these the most popular ones is the rainbow flag which contains eight colors. Each of the colors is chosen as a symbol of some value like pink for sexuality, blue for art, etc.

An identity or an issue based community is generally formed when there is social unrest, some kind of injustice is happening, or some group of people are oppressed. So LGBT community is a reaction against historic discrimination faced by these people and thus formed completely intentionally for the purpose of bringing similarly oppressed LGBT individuals from all around the world under a common umbrella to earn their human rights (Weinberg, 2013). In the US, where there is already registered LGBT population more than 8 million, there is no federal law in place to prohibit gender and sexual identity discrimination against them, especially at the workplace (Pizer et al., 2012). In Australia, the situation is not quite different, though, of course, it has improved, as research shows they still experience significant levels of discrimination and abuse (Symons et al., 2010). The proof of this discrimination can also be found in the sports field, as “it is a place where LGBT Australians are largely silent and invisible” (Symons et al., 2010). Not only in the sports field, as per Irwin(2007) instances of homophobia and heterosexism are widely found among nurses and other health professionals. Flood and Hamilton (2008) show that 35% of 14 years and above the Australian population believe that homosexuality is immoral. Although we, human beings, feel really proud of the fact that we are the only animal capable of moral duties, I am really feeling disheartened as the above facts also demonstrate that we are also the animal who is capable of hypocrisy. It is high time, when we, especially the younger generation, should move out of our strongly embedded social conditioning to be able to critically examine various social beliefs and values that have been imbibed in us without our knowledge. I believe, being also the animal capable of critical reflection, we can do this if we have the best of intentions.