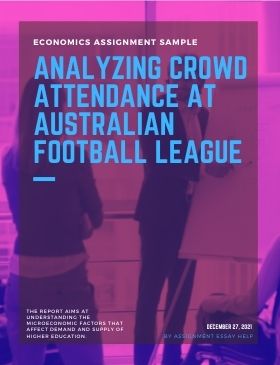 For further assistance in   Economics Assignment help, please check our offerings in Economics assignment solutions. Our subject-matter-experts provide online assignment help to finance students from across the world and deliver plagiarism free solution with free Turnitin report with every solution.

A very little quantitative work has been done in literature so far to estimate the attendance in a particular game. This paper attempts to bridge this gap by developing a model to predict the attendance for a game played in the Australian football league (AFL). Attendance for a particular game may depend upon various factors such as the day of the week (Monday – Sunday) on which the game is being played, whether it’s a home game or an away game for the team, weather condition, etc. The quantitative data is analyzed using statistical techniques such as regression analysis, bar charts, etc. The model may be useful for organizers and management to predict the expected attendance in some particular match. In this model, we considered a weekday on which the game is being played, time at which game is played, ground on which game is played and teams between which the game is played, as the factors predicting attendance. Results indicate that ground on which game is being played and teams between which game is being played correctly explain the variations in attendance. Time is found to be negatively correlated to attendance, regarding which we need to study the Australian population and have to judge when they like to go out.

In an Australian Football League (AFL) season, there are 206 matches played comprising of home and away matches. The matches are played over 23 weeks. There is a total of 18 teams participating in the league. Each team plays only one match per week, same as in National Rugby League (NRL) format.  AFL witnesses a single fixture on Friday, a couple of matches in the day as well as a night on Saturday while Sunday afternoon is scheduled for three fixtures. Some of the games are also played on other days of the week.

Attendance for a game is always an interesting factor for organizers to consider while scheduling the matches. Organizers would like the grounds to be full to their seated capacity so that revenues can be maximized. Hence, they schedule the games accordingly. We can see from the season schedule that most of the games are scheduled on Saturday since this is a holiday for most of the people and organizers expect high attendance. But attendance in the stadium depends on many other factors such as the ground on which game is being played, the day on which the game is played, timing at which the game starts, teams between whom the games are being played, weather condition on the match day, etc. In this study, we try to develop a regression model for predicting the attendance of games.

There have been studies in the past that have made efforts to analyze the impact of player performance on attendance. Zech (1981) considered player performance factors while carrying out his research [7]. Also, Corke (1982) evaluated how managerial influence affected performance [1], while Scully (1974) observed if training and management spirit made a difference [6]. As per one or more of the above studies, the parameters that play a role in defining player remunerations were: individual player performance as compared to the team, hitting or pitching performance respectively, time duration as part of the team and negotiating power of stars or superstars in the team.