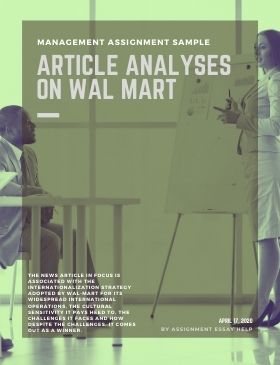 Identify and analyse an example of how a firm has responded to global pressures in competing internationally?

Global presence of Wal-Mart
Wal-Mart is based in Arkansas, the USA and was established in the year 1962 by Sam Walton. Currently, it is the largest retailer as well as a private employer across the globe. Wal-Mart has an active presence across virtual platforms; online stores, mobile terminals, as well as physical retail stores. The core-competency of the retail giant is to offer cost-effectiveness to its customers, thereby offering them means to live a better life. It has a massive presence across the globe with its online retail operations in 28 nations, physical stores in 11 countries and its Annual sales of Wal-Mart amount to $85 (ROBERTS, Bryan and Berg, Natalie, 2012). The news article in focus is associated with the internationalization strategy adopted by Wal-Mart for its widespread international operations, the cultural sensitivity it pays heed to, the challenges it faces and how despite the challenges, it comes out as a winner. The very first international venture of Wal-Mart was executed in the year 1991 to the neighboring country Mexico. In a span of 7 years, almost 18 percent of Wal-Mart stores were based internationally and 4% of the profits were coming from international operations (WAL-MART , 2016).
Imperativeness of Internationalisation of Wal-Mart
It became necessary for Wal-Mart to take its operations across international borders as the U.S market was already saturated, the scope of growth with merely 4% of the global population of the U.S.A., limited the growth of Wal-Mart, despite its potential to grow massively to other parts of the world. The concept of discounted retailing is much more attractive in the developing nations around the world; with lower disposable income and the fellow competitors of Wal-Mart were already exploring these markets.  In recent times, Amazon is giving tough competition to Wal-Mart in the U.S.A. considering which the retail giant has amplified its international operations virtually and physically and virtually. The presence of Wal-Mart in China is massive due to a huge customer base and awareness among customers towards discounts and high-quality products. Wal-Mart entered China in the year 1996by the launch of a supercentre and Sam’s club in Shenzen. It operates in China through both- Joint Ventures and Majority owned subsidiaries. Recently, Wal-Mart has entered into a new joint venture with JD.Com, the largest e-commerce organization of the country to expand its online services in the country (WAL-MART, 2015)……………