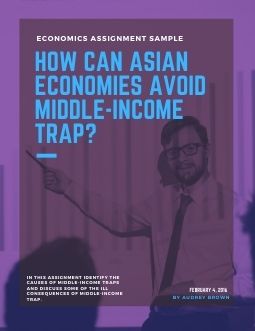 You can download the sample Economics essay on How can Asian economies Avoid Middle-Income Trap with the following question for free at the end of this page. For further assistance in Economics Assignment help, please check our offerings in Economics assignment solutions. Our subject-matter experts provide online assignment help to Economics students from across the world and deliver plagiarism free solution with free Turnitin report with every solution.

Identify the causes of Middle-Income Traps.

Discuss some of the ill consequences of Middle-Income Trap.

Highlight some measures that East Asian Economies can take as to avoid such trap.

When we talk on the subject of economic development, we generally refer to the ongoing discussion on Sustainable Development, which is primarily based on three pillars: economic sustainability, social sustainability, and environmental sustainability (Hansmann, Mieg, & Frischknecht, 2012). If any of these three pillars or aspects of sustainability are not achieved in the course of economic growth, then it is highly probable that the growth is not leading the economy towards a balanced sustainable path (Lehtonen, 2004). For example, social sustainability comes from a far and justified distribution of wealth among the citizens of a nation, and this distribution depends largely on the ecological setting of the nation. If in the due course of economic growth rapid industrialization takes place, it will lead towards two scenarios, namely the destruction of forests and agricultural fields for industrial expansion, and consequential rural to urban migration of unskilled farmers. As a result, urban infrastructure will face a huge challenge in terms of creating jobs for the migrated populace, and a huge fraction of the populace will continue to survive at a very low and noncompetitive wage rate…

When the economy is being faced with middle-income trap, labor and employment sectors are most badly hit. As the flow of investment gradually diminishes away, industrial production is badly hit. At that point, the government comes to the fore to lend a hand to the industrial sector. However, continuous funding of industries by a government, in turn, results in the advancement towards the black hole of fiscal deficit. 'Industry cannot run, because the government lacks funding, and the government lacks funding because an industry is not running properly' – this is the kind of spiral trap, in which the economy finds itself being stuck. To fund the fiscal deficit, a government may increase the interest rate, with a view to sucking out the liquidity from the market and channelize the same towards industrial development. In this course of monetary contraction, citizens will seize to have extra disposable income in their hands. This will coexist with high market price due to the higher cost of production. Coexistence of these two unfavorable conditions in the economy will lead towards hyperinflation. Despite the fact that from the perspectives of investors residing outside the nation high rate of interest may prove out to be a favorable investment destination, however, as the real interest will go down drastically, sooner that situation will also die away. At the end of the day, an economy will stay with a state of hyperinflation and growing unemployment…

WHAT EAST-ASIAN ECONOMIES SHOULD DO?

When we look at the growth patterns of the East Asian economies, it turns out to be visible that subsequent to achieving a high growth rate for a stint period, the economies are about to face or facing a middle-income trap. In fact, not all of the entire set of East Asian countries is facing this pecuniary predicament. If we compare with Latin American economies, then we can see that some of the East Asian economies performed pretty well in comparison with their Latin American counterparts. Taiwan province of China and Korea achieved the growth level of Brazil, Mexico, and Peru in pretty less amount of time. However, subsequent to that, the Latin American nations fell into the middle-income trap and these two East Asian giants moved from low to middle and from middle to high-income level within no time at all. If we look at the performance of other East Asian nations, we can see that they are eventually following the trajectory of the Latin American nations. However, the low-income East Asian nations are showing a gradual improvement in their growth rate , economists around the world are afraid that they are going in the direction of the similar types of predicament (Paus, 2012)…