Auditing assignment - B & B Co. Ltd. - Skip to content 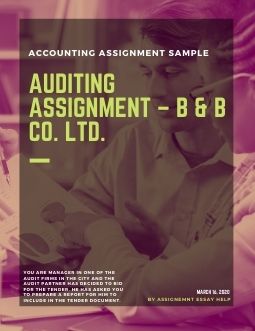 You can download the sample Finance Resource essay on Accounting for Managers with the following question for free at the end of this page. For further assistance with Finance Assignment help, please check our offerings in Finance assignment solutions. Our subject-matter experts provide online assignment help to Finance students from across the world and deliver plagiarism free solution with a free Turnitin report with every solution.

Barry and Betty (husband and wife) have been running their business as a partnership for more than twenty years. Both of them are near retirement age but they feel so attached with their business that they would not like to sell it. On the other hand the demand for their products is rising significantly that they have to expand their production department and recruit more staff. Moreover the expansion also requires more financial investment in the business. At a partner’s meeting they decide to transfer a major part of their shares to their children.
They have two daughters and one son. Their son (Robert) is an air-conditioning engineer whereas one of the daughters (Chan) is a medical practitioner. The youngest daughter holds a degree in management. The children are excited by this move, but the youngest one (Jane) tells her parents that before doing any transfer, it is necessary to convert the partnership into a company. It is agreed and the company is incorporated under the name of B & B Co. Ltd. The shares are distributed as follows:
• Betty-10%
• Barry-10%
• Robert-20%
• Chan-20%
• Jane-40%
The reason for giving Jane a larger share than the other two children is because she will be involved in the day-to-day management of the company. During the first meeting of the company, Jane informs all the shareholders that the business is no longer governed by Partnership law, but the Corporations Act and the requirements of the Corporations Act are different from that of the Partnership Act. Jane makes it very clear that the company, given its size, needs to have its financial statements audited every year. The other shareholders agree with the proposal but argue that they need to understand:
• What the audit would involve?
• Who could be the auditor?
• Would it be wise to allow a third party (the auditor) access to their confidential business information?
• What if they do not have the accounts audited?
• Can Jane do the audit herself?
Finally the board agreed that the company issue an invitation to tender for the audit of the company’s financial statements.

You are manager in one of the audit firms in the city and the audit partner has decided to bid for the tender. He has asked you to prepare a report for him to include in the tender document. Your report should address the points raised by the shareholders but you are also address why they should consider the particular firm to undertake the audit.

B & B Co. Ltd was formerly a partnership company that was converted into a public limited company but the shareholding of which is within the family namely Mrs. Betty, Mr. Barry and their children Robert, Chan and Jane. The shareholders have raised various doubts regarding the new system of getting the accounts audited. Our firm Audit & Co., has applied for the audit of B & B Co. Ltd. This report will answer the various queries raised by the shareholders of B & B Co. Ltd……….