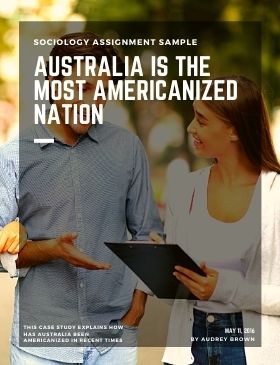 You can download the sample Sociology essay on Individual attributes of a person with the following question for free at the end of this page. For further assistance with Sociology Assignment help, please check our offerings in Sociology assignment solutions. Our subject-matter experts provide online assignment help to sociology students from across the world and deliver plagiarism free solution with a free Turnitin report with every solution.

Has Australia been Americanized in recent times?

Sociology Assignment Solution on Australia Is The Most Americanized Nation

In the recent times, Australia has become the most Americanized nation in the world. There have been many reasons for this, and the most important one is considered as the 9/11 attack on America. It has given the world a hot debate to be indulged about the future of American foreign policy and its nature as well. No wonder in saying that whatever interests America interests the whole world. And thus it has become a matter of global culture and politics. Australia is deeply engrossed into its military, economic and cultural powers as it is known as the most Americanized nation. Its 2003 Fulbright Commission conference in Brisbane had a central theme to debate entitled 'Are we all Americans?' They were trying to get to the point where the global Americanization is going to lead the just entering second nation state Australia. At the same time, there can be a possibility of American statehood for Australia. Australia's emerging men power and the education system are making it stronger. Today Australia has become the first priority for the international students who want to go abroad and pursue their higher studies. Australia's economic conditions have started getting a bigger chunk from the international students. There are many reasons behind it being more Americanized (Mosler 2004)…

Millmow (2005) says that the Australian economy in the twentieth century is crucial factor in respect to its Americanization. The author demonstrates this by discussing two important periods in Australian economics. Where the first is concerned with the mobilization of native economics expertise in the development of policies to handle the Great Depression scenario, the other is concerned with the rise of neo-liberal policy or Australia's economic rationalism. Australia's old issues of idiosyncratic tradition have largely been resolved by internationalization. The contemporary Australian economics have succeeded in attracting the young minds, unlike its inter and post-war period. Australian economics start from 1925 when it was founded as the Economic Society of Australia and New Zealand. It was regarded very poorly before that. Before it was formalized, it had an amateurs' vein. It was only theoretically taught in the classes of Workers Educational Associations (Heaton 1926). It usually came from university economics, but was also related to conventional economic ideas. It somehow managed to survive the first century of its beginning…

Australia's English-speaking people are increasingly greater. Australia's universities and higher education are comparatively much research-oriented, and therefore it is mainly concerned with research-intensive universities (Marginson 2006). Researchers in the area have defined globalization in terms of higher education as it widens and deepens all kinds of worldwide connections (King 2004); it connects all the countries to each other. But this global effect is not uniform and all-consuming everywhere. In this connection, we see that America's intake of international research students is very low in comparison to Australia's intake of international students. It may not seem a big affecting point to people who don't take it up seriously. But we know that with the growing popularity of international students, Australia is developing and spreading more English speaking students and courses…