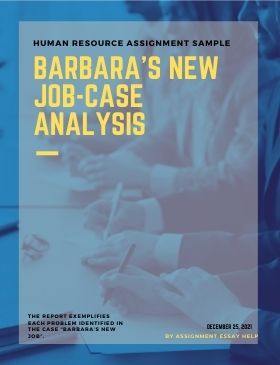 A vivid field, in the study of an organization, pertains to the analysis of the emotions and attitudes that are prominently witnessed in the organizational setting (Williams & Mc. Williams 2014). The study is majorly covered under study areas of organizational behaviour and organizational psychology. The area of study is gaining prominence, especially with a globalised business scenario, where companies are spreading overseas and cross-cultural teams are working together (Gopinath 2011).

With such an organization based scenario in mind, the report would extend to analyse the case of Barbara’s New Job. In the case, a culture of interpersonal differences has been witnessed by varied emotions and attributes, displayed by the different employees in the organization. The report would majorly analyse the problems identified in the case in terms and also bring out recommendations to manage the situation based on the existing theories that pertain to the study of emotions and attitudes along with the organizational culture.

On the basis of comprehending of facts and information, as has been presented in the case of Barbara, a mix of leadership and behavioural issues could be identified as the reason behind the dissatisfaction at work that compelled Barbara to take a decision to either resign or take a transfer from the job.

An array of issues with identified causes can be brought out from the case, including: