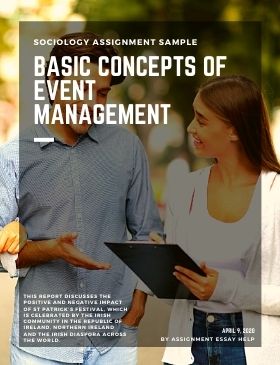 Apply the basic concepts of event management to a real situation, to access information from a number of sources, to review and then present a large amount of information in a logical format.
In your task Research an event or festival in the Republic of Turkey, the Republic of Ireland (southern) or an aboriginal event or festival in Australia.. This same event will be used in research project 2. You are then to prepare a report on the event. The report is to follow the guidelines on the Library home page or in theCommunication skills handbook by Summers & Smith.

Festivals and events have gained significant importance in recent decades and are used to promote tourism across the nation (Richards & Palmer 2010). Festivals and events include programs, entertainment activities and public celebration of some fact or concept (Barrio et al. 2012). They provide an opportunity for the local people to display their local cultural practices, customs and traditions and collective celebrate the event (Allen et al. 2010). Festivals and events enable nations to display the cultural values and heritage across the globe and attract people from across the world to visit the nation and participate in the cultural events (Barrio et al. 2012). This provides increase economic benefits and provides an opportunity for the local people to show their talent, get recognized globally and gain increased business (Richards & Palmer 2010). This report discusses the positive and negative impact of St Patrick’s Festival, which is celebrated by the Irish Community in the Republic of Ireland, Northern Ireland and the Irish diaspora across the world.
About the Festival- Saint Patrick’s Day
Saint Patrick’s Day is held on 17 March and is a celebration of culture and religion. On this day Saint Patrick, a patron saint of Ireland had died and it celebrates the culture and heritage of the country (Cronin & Adair 2006). As per the tradition, Patrick returned to Ireland and converted pagan Irish to Christianity and died on this day and was considered Ireland’s famous saint (St Patrick’s Festival 2016). It is a public holiday in the Republic of Ireland as well as Northern Ireland and involves public parades and festivals, people attend church services and many other activities are carried out (Volo 2014). On this day it is customary to wear green clothing or accessories and shamrocks as the shamrock is considered sacred by pagan Irish. The Republic of Ireland celebrates St Patrick’s Festival with an aim to offer national festival, which ranks as the greatest celebration in the world as compared to other festivals (St Patrick’s Festival 2016). The festival is also carried out to create energy and enthusiasm across the nation through creativity, innovation, marketing activities and grassroots involvement (St Patrick’s Festival 2016). The festival is aimed at providing opportunities and motivation for Irish people and others to attend and join the expressive and imaginative celebrations (Volo 2014). ……………….