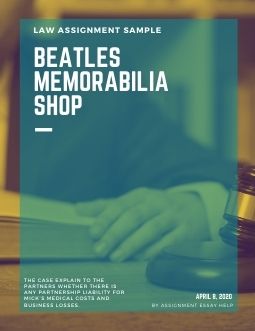 QUESTION 1 (DO NOT USE IRAC METHODOLOGY FOR QUESTION 1)
You and four friends (James, Peter, Graham and Roger) have decided to open a Beatles memorabilia shop.    You have decided that it will be a partnership, with each partner contributing $5,000 each as a set up cost.  No additional investment money will be asked from the partners.    Peter, Graham and Roger do not want to have anything to do with the running of the shop. They only want to be investors.
You have planned an upcoming meeting in which you need to explain to all of them their financial and legal liabilities, and to provide them with key points to be included in a written partnership agreement that you think is suitable.
List the main points you should include in the partnership agreement in relation to the following:
Financial contributions to the partnership
Authority of partners to purchase items for the shop
Decisions the partners will make in relation to the shop.
QUESTION 2
You and the others have now all signed a partnership agreement which gives all decision-making power to you and James.   Peter has shown a great interest in the shop, and has been coming in regularly to say hello and talk to customers.   He always wears the custom-made Beatles t-shirt you have provided to anyone working in the shop.   One day, one of the customers (Betty) is in the shop and tells Peter she has some Beatles memorabilia for sale, and Peter arranges to go to Betty’s house with Graham to see it.  Peter and Graham immediately tell Betty that they will buy $5,000 worth of her memorabilia. They take it from her to the shop the next day, with a promise to Betty to send a cheque the following day.  You are horrified that Peter and Graham have taken it upon themselves to act on behalf of the partnership, especially when you hear how much they have agreed to pay for it. You tell them the partnership is not going to pay for it.
Is the partnership liable for the memorabilia purchased from Betty?
QUESTION 3
You have employed Ringo, who is a passionate Beatles fan and a walking encyclopaedia of Beatles trivia, to work in the shop.   One day Mick comes in. He operates the Stones Café at the end of the street. He starts giving Ringo a hard time, saying that the Rolling Stones were always better than the Beatles.    Ringo punches Mick in the face.  Mick sustains a broken nose and bruising to the face. Mick requires a number of x-rays and scans, plus he has to close the café for that day.  He then has to pay $4,000 in medical costs. He estimates his business loss is $2,000.
Explain to the partners whether there is any partnership liability for Mick’s medical costs and business losses.
QUESTION 4
You have been selling “Apple” t-shirts designed by James.  It is designed to resemble the Apple computer logo, with the faces of the Beatles intertwined.
Apple computers have complained to the Australian Competition and Consumer Commission (ACCC) that you are misleading and deceiving the customers into thinking that this t-shirt is a genuine Apple product.
Using relevant legal principles and cases, discuss the Apple complaint and the ACCC powers.