BPECNAVS1000 Unemployment in the Australian labor market - Skip to content 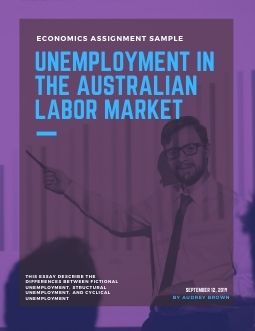 Instructions
Your manager has asked you to prepare a 1,000 word report on unemployment in the Australian labour market. In preparing your report, your manager has asked you to:
• Explain what determines if a person is in the labour force?
• Distinguish an unemployed person from one who is not in the labour force?
• Describe the trends and fluctuations in the unemployment rate in Australia from 1980 to 2014 (the data can be downloaded from the Australian Bureau of Statistics).
• Describe the differences between fictional unemployment, structural unemployment, and cyclical unemployment
• Outline the economic and social costs associated with unemployment.

The report must be structured as follows:

Tips for preparing your report:
• Define your terms;
• Clearly explain economic concepts;
• Provide relevant examples;
• Make use of multiple references;
• Keep to the word limit; and
• Ensure your assignment is well-presented and free from grammatical and typographical errors.

Unemployment in an economy refers to the situation of joblessness faced by active job-seekers residing therein (Statistics, 2014). It is measured by the Unemployment Rate which is the ratio between the number of unemployed people and the size of the economy's labour force. Unemployment, in general, is a threat to the growth of economies as it may lead to conditions of enhanced poverty and low standards of living and is a waste of potentially useful human resource (Mankiw, Principles of Macroeconomics, 2014).

This report analyses the unemployment issue in the Australian labour market between 1980 and 2014, discussing hidden threats amidst perceptible progress.

The Labour Force of a country is a summation of its employed and unemployed individuals. 'Unemployed' individuals are those who are above the age of sixteen, are actively seeking jobs but are currently without an offer (Statistics, 2014). This definition automatically eliminates persons who are not presently interested in working, for example, full-time university students, the retired elderly, school-going children, etc enabling us to differentiate between an unemployed person and one who does not belong to the labour force.

Besides over-population, low literacy, financially weak families, etc (Louis., 2014), in Australia, other factors like the prevailing economic environment, the institutional and policy framework for the labour market, and a variety of social factors such as attitudes towards desired hours of work and willingness to move locations or undertake further training in order to secure employment (Government, 2008-09) influence unemployment. Extracting unemployment data from the Australian Bureau of Statistics, we can plot the following chart.

Between 1980 and 2014, Australian unemployment has fallen from 6.7% (1980) to 5.8% (2014). A close examination reveals that the unemployment rate has faced several short-term seasonal fluctuations with almost every period of extremely low unemployment rate being followed instantaneously by a skyrocketing rate of unemployment as can be seen for the years 1983 and 1993. Post-2000 however, the unemployment rate has been more stable compared to the preceding years, remaining between 4.5 to 6.8%. In January 2008, it reached an all-time low of 4.5% following which it has started its gradual upward climb finally resting at 6.1% in October 2014. It is important for any organisation or investor to keep track of these unemployment rates as they are keys to measuring the state of the entire economy (Koba, 2014).

Major Types of Unemployment in Australia