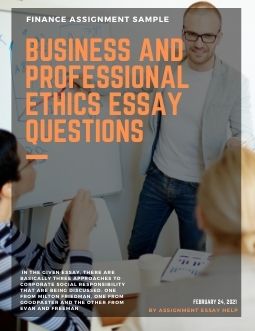 What moral obligations do corporations have to the various stakeholders in a firm, including to society more generally?  Answer this question with reference to the views of Milton Friedman, Evan and Freeman and Kenneth Goodpaster, making sure to explain the strengths and weaknesses of their competing positions. Which approach provides the most convincing account of the social responsibilities of business? Give detailed reasons for your answer.

Corporations or corporates as we refer to as in the simplest of terms, business units which aim to make a profit by the goods/services they promise to provide. In the pure sense of economics, businesses exist for profit earning which can be subsequently used for the benefit of its founders and people associated with it. Businesses function in a society, it derives its resources from society, and its endpoint is also in society. Though Prima Facie, the main objective of a business is to earn profits, there is a certain other responsibility that comes with it. This would be like not destroying the environment to fulfil the profit motive, ensuring that people who are directly and indirectly involved in running a business are benefiting from it. The point here in question is that is there anything other than profit earning that corporation are responsible for?  Do they have a certain responsibility towards their stakeholders, towards the society?  There is a term that has been coined for activities which go beyond the ambit of profit-making for business; it is called Corporate Social Responsibility (Bowie, N.E., 1999).  Corporate Social Responsibility is an approach, which contributes, to the growth and development of its stakeholders by providing economic, social, moral and environmental wellbeing. Its basic purpose is to move society towards feasibility.  In simpler words, Corporate social responsibility can be explained as the moral duty of a company which derives benefits from society to give something back to society. It is giving back a portion of what they achieve to have holistic development of society.  In the given essay, there are basically three approaches to Corporate Social Responsibility that are being discussed.  One from Milton Friedman, one from Goodpaster and the other from Evan and Freeman (Velasquez, M.G,2002).

There have been basically three approaches that have been used; one says that stockholders are the immediate beneficiaries and a corporation and business should be solely responsible for them. The next approach is that which says that there are shareholders who influence and are as much a part of business as any other and they should be accounted and taken care of. The third approach is somewhat of a middle ground which says that both of them should be accounted for. The approach that is being used in this essay is the third one, the one attributed to Goodpaster and which talks about understanding the moral obligation. This has been done in the context of understanding and analyzing the theories of Freidman and Freeman.