Chinese Characters in Japanese and Korean Language Skip to content 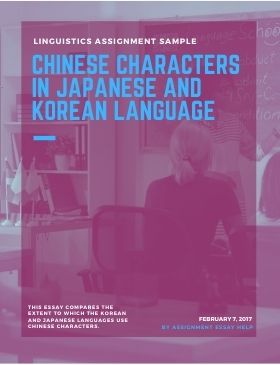 What are the Chinese Characters used in Japanese and Korean Language?

This essay compares the extent to which the Korean and Japanese languages use Chinese characters. We will begin with a discussion of how the characters entered the Japanese and Korean language spaces, as it has an important bearing on the development of their indigenous languages. We shall then focus on the extent of influence of the Chinese characters along with details of how many of them were used and in what manner they were assimilated into the languages under discussion. This also entails a brief description of the attitudes of the indigenous population towards the use of Chinese characters based on the socio-political dynamics over various periods in history.  We shall also examine the status of the languages today, and the importance given to the absorption and use of the characters. The main source of information used in this essay is derived from the contents of the book, 'Asia's Orthographic Dilemma' written by Hannas.Wm.C and published in 1997.

Both Japanese and Korean languages are believed to be 'Altaic' and have no connection to Chinese linguistically.  Japanese today use the mixed script which is a combination of Chinese characters with their phonetic and semantic conventions and the indigenous language. Two types of texts, the kambun, written in Chinese style, and kana written in colloquial Japanese have merged to make up the Japanese writing system that exists today. According to historical evidence, (Hannas, 1997), Chinese script was introduced when books were brought to Japan around late 3rd and 5th centuries A.D.*[1] Development of the Japanese script was prompted by the urge to read the Chinese text in Japanese and to document the elements of the indigenous language. This resulted in giving Japanese interpretations to Chinese characters to be able to make the Chinese texts intelligible to the people.

The use of Chinese characters was associated with erudition and prestige and hence they continued to be used giving rise to a mixed script. (Kaplan, et al August 2008).

Both Japanese and Korean languages are agglutinative languages as opposed to Chinese which is an isolating language.*[2] The basic structure of a transitive Japanese sentence is SOV while that of Chinese is SVO (Hannes, 1997)

With Japanese, the major difficulty is that character sets are hardly related to its language sounds and therefore it needs a number of methods to make them represent the language. This has been a major difficulty for Japanese in adapting to the Chinese characters.

Nearly half of the Japanese lexicon today is made up of Sinitic terms and this was made possible due to the 'kambun' system of making Chinese texts interpretable in indigenous Japanese.

It is observed that, around 3000 kanji or Chinese characters are currently being   used in the Japanese newspapers and magazines.   It is necessary for children to be taught these characters as it widely used in society. Over the past 100 years the government decrees and other measures have been trying to restrict the use of kanji in the common language and for teaching children in schools. This could be the result of westernisation of Japan. Kanji is also used for scientific and technological purposes and personal names. According to their frequency of use, JIS (Japanese Industrial Standard) lists 3 levels of kanji. (Taylor, 1995). The Japanese and Koreans use Chinese characters in similar ways except that using  but they differ in the readings they give to characters. While the Koreans use only Chinese reading of characters, Japanese use various readings in the Chinese and native languages resulting in multiple meanings that have to be determined from context. In contrast, the Koreans prefer to use Hangeul, which is their own script, and avoid the use of Chinese characters.