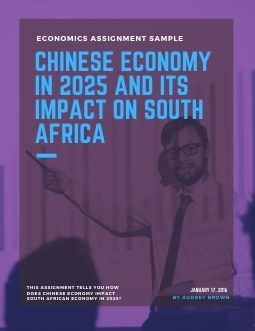 You can download the sample Economics essay on ” with the following question for free at the end of this page. For further assistance in Economics Assignment help, please check our offerings in Economics assignment solutions. Our subject-matter experts provide online assignment help to Economics students from across the world and deliver plagiarism free solution with free Turnitin report with every solution.

How does Chinese Economy impact South African Economy in 2025?

China's transition from underdevelopment and extreme poverty to an emerging global power in just a matter of three decades has been phenomenal. During this time, GDP growth had averaged 10 percent a year, and over 500 million people had been pulled out of poverty. China is now the world's largest exporter and manufacturer and its second largest economy. Even if growth moderates, China is likely to become a high-income economy and the world's largest economy before 2025, notwithstanding the fact that its per capita income would still be a fraction of the average in advanced economies.

First, a brief introduction of the Chinese and South African economies has been made. Their similarities have been outlined to determine why South Africa idolises China for its development strategy. Next, an analysis has been made of the economic entanglements between the two nations – pattern of trade, aid and investments. A discussion on where China will stand in 2025 follows this. How politics is shaping the future economic relationship between China and South Africa is the next topic of interest. Through this discussion, we will be able to predict how the Chinese economy will have impacted the South African economy in 2025.

In spite of being Africa's largest economy, South Africa's macroeconomic indicators have been performing weakly of late. As the rest of Africa begins to prosper, South Africa grew at an annual rate of just 1% in 2013, making the estimated GDP growth rate of 2.8% appear too optimistic. Threats of strikes and labour unrest are common owing to the poor labour relations and strict regulations. This has led to joblessness being a major problem among the youth with 25% unemployed. Job-creating new enterprises find it difficult to emerge due to red tape. Wage deals struck by big firms with big unions are imposed on the smaller firms and this is a barrier to start-ups. Such sectoral pay deals reduce the number of jobs by 8-13% in affected industries.

After three decades of rapid economic growth, the world's second largest economy is now on a gentle downward trend. Its GDP growth rate has slowed to 7.3% from double-digit figures. The focus has shifted from promoting the export sector of the economy to driving domestic consumption. While unemployment has fallen to 4% and 500 million people have been raised out of poverty, 13% of the population are still poor, i.e. China is home to the second largest number of poor in the world.

Sino-African relations are unfolding against the backdrop of China’s increasing dominance in the global economy. In 2010, China was South Africa's largest trading partner. Also, South Africa accounts for the bulk of the trade that China indulges in with the continent of Africa as shown clearly by the pie chart below.

By 2025, China has the potential to be a modern, harmonious, and innovative high-income society (Bank). However, reaching this goal may not be that simple. The reforms which had pushed China onto its present growth path had been motivated by Deng Xiaoping. He had played a significant part in conjuring agreement for a fundamental shift in China's strategy. After more than 30 years of rapid growth, the country has reached yet another turning point in its development path (Bank). To realise the development vision of 2025, yet another fundamental and strategic shift in planning is necessary for China. The 12th Five Year Plan has appropriately addressed these needs.

China's fight for national independence had always inspired the South Africans. It was only in 1998 that Mandela helped to establish diplomatic relations with China. Since then, China and Africa have come a long way by signing a number of agreements on trade and investment, education and infrastructural development (Cai, 2005). Ahead of the recent BRICS summit, new Chinese leadership, Xi Jinping met his South African counterpart, Jacob Zuma in Pretoria on March 26th before heading to Durban for attending the summit.

China's rapid growth dynamics and her ever-increasing demand for a variety of resources is impacting the world economy in diverse ways. China is expected to catch the USA by 2025 in terms of GDP. It is highly probable that the rapid growth in the BRIC nations in the next 20 years and the huge oil reserves of some middle-east countries can transform South Africa more than 60 years of western aid and investment could achieve.  But one is left to hope that China and Russia have more regards more human rights and democracy than that which the USA and other ex-colonial of the past have had.

As China's increased presence in South Africa is relatively recent, it is hard to determine the exact growth scenario in 2025 and valid investigation will take up several years. However, preliminary studies do show a rise in the volume of trade between the two countries, even after China's adoption of its new development policy. Moreover, this trade has been producing a surplus for South Africa in the last few years.