HI5019 Use the Theory relating to Adaptation, Aggregation and Arbitrage - Skip to content 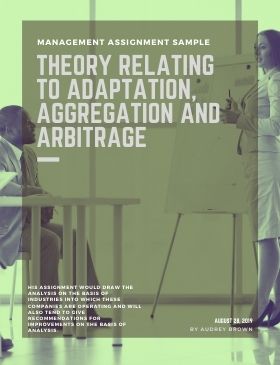 Use the Theory relating to Adaptation, Aggregation, and Arbitrage to explain how companies from the following industries have used this theory for the pursuit of their businesses:

Students should choose 2 industries from the list above and 2 companies in each industry (4 companies in total).

This is a group assignment.  Every member of the group is expected to be able to discuss all areas of the report.  You should meet many times and discuss the issues identified in the report.

Every organization is poised to be competent enough on a global stage and for this, it is very important to decide a proper strategy. There are three strategies that have been provided by Ghemawat for an organization to compete in global market strategies are Arbitration, adaptation, and aggregation (Ghemawat 2012). An organization uses aggregation strategy when it wants to achieve economies of scale. When an organization wants to boost the market share it goes for an adaptation strategy by meeting the needs of the local market and customizing the process accordingly. An organization uses arbitrage strategy when it wants to exploit the differences in markets. Thus an organization may use one or more strategies to compete in the global market. It totally depends upon the predominant nature of the business. For instance, if investment in advertising is high then it means an organization needs to adapt to the local markets, a focus on research and development suggests aggregation is required for achieving economies of scale and if there is preponderance in expenses of labor then its arbitrage. Thus the aim of this project is to analyze these three strategies for two industries and two companies of the respective industries. The industries that have been chosen for the purpose of AAA framework analysis are computer industry (both hardware and software) and the pharmaceutical industry. The companies in the computer industry are Apple Inc. and LG. The companies in the pharmaceutical industry are Glaxo Smith Kline and Cipla. This assignment would draw the analysis on the basis of industries into which these companies are operating and will also tend to give recommendations for improvements on the basis of analysis. The organizations uses AAA framework to determine their competitiveness in the global market.

When an organization wants to serve the best to the local market it uses an adaptation strategy and customize the products according to that. Adaptation is a strategy that is not relevant for the computer industry. Generally, the hardware and software are not customized according to a local market. They are uniform all over the world. When talked specifically about Apple Inc., it believes in the thought that the company would not adapt according to the market or the “customers” but the customers will have to adapt according to the product and the company (Wible 2011). Here the Apple Inc is following the strategy of “one-size –fits all (Ali 2013). The phones of Apple Inc. are available in more than 115 countries around the world and everywhere they are uniform. Let us take an instance of LG with respect to the adaptation strategy. LG deals in so many other items except for computers. The amazing fact is that except for the computers it customizes its products according to the country or the region, but for computers, it has the same designs all over the world. Thus like Apple Inc. LG also has nothing to do with an adaptation strategy with the computer product line. In pharmaceuticals “industry” there is a need to adapt according to the country or the region if sales are to be increased. In Glaxo Smith Kline they have a strategy to produce drugs according to the environment of the region in which they are supplying. The same types of medicines are not suitable for every individual in every region. Thus it is also seen that GSK is spending much on an advertisement. The responsibility statement of GSK suggests that they are adapting their business model with respect to their mission and they are moving towards sustainable performance so as to improve the quality of a human’s life (Holt 2010). Cipla is also adopting an adaptation strategy and it is very rigorous in doing so. The reason behind this is that it has bi-monthly promotional schedules and doing intense marketing. Cipla is also indulging in tie –ups with other small companies in the local market so that it can boost up the sales in every region it operates. Thus the analysis of the above four companies suggests that adaptation strategy is very useful in achieving marketing goals (Romain 2011). Apple Inc. and LG shall also work out on these strategies to make their remarkable presence in the local markets.

It is a strategy that is adopted by an organization when it wants to achieve the economies of scale (Morschett 2015). It is a type of undifferentiated strategy. Talking broadly with respect to the pharmaceutical companies they are not very aggressive in doing this. The pharmaceutical companies are trying to employ cross-border mechanisms for this (Lee 2010). GlaxoSmithKline (GSK) has been trying to do since so many years but it is not feasible. In this strategy, the company standardizes goods and services according to the large population with an objective to exploit the similarities among the countries so as to establish economies of scale. The research and development expenses are very high and due to this reason it wants to aggregate the market. But this strategy is the exact opposite of adaptation. In adaptation, the products are customized according to the needs of customers and in aggregation, all the customers are assumed to be a single group. Cipla is doing the trade in the regions that are geographically close to it and thus it does not need aggregation strategies. It is a case of regional bias. As far as the computer industry is concerned it has to rely on the aggregation strategy. The reason is that it focuses on research and development is very high and when this is the case then aggregation strategy is being used. It shall also be noted that Apple Inc. is using aggregation strategy as it is manufacturing all the mobile phones according to its suitability and economies of the scale. It is not taking into consideration the choices of customers. As discussed earlier in the adaptation strategy that Apple Inc. believes in making customers adjusted towards the product rather than