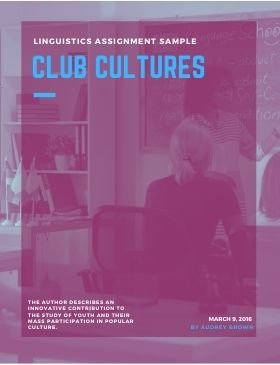 You can download the sample Linguistics case study on Club Cultures with the following question for free at the end of this page. For further assistance with Linguistics Assignment help, please check our offerings in Linguistics assignment solutions. Our subject-matter experts provide online assignment help to Linguistics students from across the world and deliver plagiarism free solution with a free Turnitin report with every solution.

What is the contribution of the youth and their mass participation in popular culture?

This text serves as a review of the original material provided which is an introduction to the whole book (to download the book pdf file click this link) about to unfold for the readers (Thornton, 1995). The author describes an innovative contribution to the study of youth and their mass participation in popular culture. The author mainly focuses on the youth majority of the British population believing in the mass hysteria of club culture. The author also makes sure she sticks to the heterosexual population.
This chapter focusses on introducing the various other chapters in the book. It focusses on the youth population that dwells around night clubs, raves and parties in the USA and Great Britain. This chapter elevates some serious questions regarding the cultural empowerment and the traditional role of the growing academic order, cultural studies. It also wraps up not only the club prospects and its relationship with the media, but also the history of discotheques, the decline of live music and the equivalent rise in popularity of its pre-recorded counterpart, as well as the notion of hipness (a concept vital to the younger generation). The author explains how common preference for music draws the youth together and makes them flock at the night clubs. (The birth of disco, 2015)
The author goes on to explain how inside the clubs there is an ecosystem of their own beginning from the phony new arrivals to the eldest of the lot who have been frequenting the night clubs. She also describes how different types of approach conglomerate at the night clubs. Some people consider the clubs to be a place for real fun, others just visit the clubs to remain wanted in the peer group they belong to. (Thornton, 1995)
The author speaks about the rapid change of live music fading out into the era of prerecorded music. Prerecorded music is easier to carry around, needs one person to handle and requires less money to be spent for the club owners. Live music requires a great deal of stage preparations and equipment. Instead, one person can have a plethora of recorded music and play it at the discotheque.
The author mentions how different kinds of food habit at the night clubs merge into a unanimous food habit. She says that the music of two different places can be similar because in the contemporary world the spread of music is dependent on the internet and social media (The body and soul of club culture, 2015). The author also mentions that the style of dressing can also be carried over from one place to the other due to the same factors or due to reasons like youth visiting different clubs at different times. But one that cannot be copied over is the style of dancing at the night clubs. There are diverse varieties of the dance styles depending on the music playing, but the majority of the dance styles at a place belongs to the same genre. The only way dance styles can be copied over would be the youth, shifting in masses to a different geographical location.
Sarah Thornton speaks about the club culture’s transgression from a youth attraction into a practice which can be enlisted next to a culture. She explains how the media along with the mainstream population have given recognition to club culture and raves which has led it to become a sub cultural phenomenon. The author further explains the fact that sub-cultures form as a result of similar action being performed transforms it into taste culture. After that, she goes on to explain the transformation of live music into recorded music (Thornton, 1995)
The author brings up an example from the text of Pierre Bourdieu and explains the concept of sub cultural capital, which explains the phenomenon of an event purely commercial in nature transforming into a socio-cultural phenomenon. She further explains the fact that the terms like ‘cool’ and ‘hip’ are concepts being used to describe the youth population in the clubs. The old visitors term themselves as hip and cool and the mainstream population are termed ‘ignorant squares‘.
There is a huge controversy over the 'hipness' of the whole British youth possessed by the night clubs. There is a part of the mainstream population who believe that the club culture is a cultural diversion and that the culture and ecosystem of clubs are steadily destroying the integrity of the original culture, tradition and values. She explains how the youth also decides to live outside their parent's home to be able to party at the night clubs at their will. The youth who frequent the clubs, also have enough money to pay off the age limit for drinking. Other reasons to be at a club include the desire for tasting drugs like ecstasy, LSD and MDMA…

Clubs create a utopia of their own for the youth of today. The whole text is extremely well supported with case studies and is readable, and innovative. The author goes on to predict and presume that the study of club culture and rave parties are going to creep into study materials dealing with sociology and media. (Brewster B., 1965)