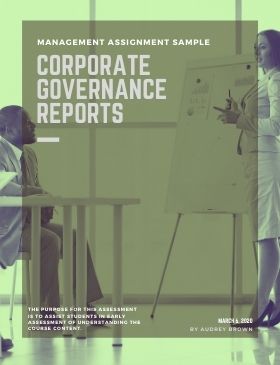 Six short answer questions will form the basis of this individual assessment task.   The purpose for this assessment is to assist students in early assessment of understanding the course content.

(Source: Lisa Barnes, University of Newcastle) On Thursday 15 February 2007, the Australian Securities and Investments Commission (ASIC) commenced civil penalty proceedings relating to James Hardie. Both current and former directors and executives were investigated on matters of possible criminal issues, especially in relation to the Medical Research and Compensation Foundation (MRCF).  On Friday 16 February, the then Chair of James Hardie, Meredith Hellicar, and several directors resigned their positions.

James Hardie was founded in the late nineteenth century, and became an iconic company, especially in Australia in the twentieth century, for mining, importing and manufacturing asbestos-based products.  Commonly referred to as ‘fibro’, fibro-cement played a key role in the growth of expanding cities as it was a cheaper alternative to brick, but supposedly safe and durable. However, fibro sold by James Hardie was made of asbestos, which even back in the 1930s was known to be ‘causing deadly lung disease’ (Ministry of Health Report 1938, cited in Kjellstrom 2004).  Indeed, for James Hardie, the first workers’ compensation case occurred in 1939 (Hills, 2005); but it was not until the mid-1960s that James Hardie was given information on asbestos-related diseases among its employees in which they were told that liabilities could be as high as A$1.5 million, which set against shareholders’ funds of $30 million seemed significant (Haigh, 2006).  Despite these health warnings and potential impact of liabilities from compensation, James Hardie continued to manufacture the product until 1987.

Asbestos and its health impacts

Asbestos has been found to cause many medical conditions including lung disease and, in particular, mesothelioma, lung cancer and asbestosis.  Mostly, however, it takes between 15 to 30 years before symptoms present themselves after people are exposed to asbestos dust (Smartt, 2004). Asbestos was mainly used in domestic and industrial buildings, brake linings, fibro sheeting, pipes and insulation.  The health effects of its use are not limited to employees, however; they also include neighbours of mines and manufacturing plants, and demolition contractors. These effects are recognized internationally (Jackson, 2004).

The fact that the medical implications of exposure to asbestos were known as early as the late 1930s, and that James Hardie knew about it via their own employees’ workers compensation claims in the 60s, and the fact that it took another 20 years until the manufacture of asbestos products ceased, showed that manufacturers ‘knew at an early stage about the dangers of asbestos and made a commercial decision to keep producing it, thereby jeopardizing lives’ (Spender, 2003: 235)……………