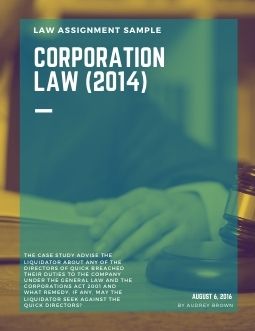 In 2007, Quick Ltd was listed on the Australian Securities Exchange (ASX).  Quick was a leading transport and logistics company in New South Wales (NSW), providing supply chain and distribution solutions to all types of businesses.  The company was in a strong financial position in the financial year ending 30 June 2012.

In October 2013, the Supreme Court of NSW appointed a liquidator to Quick.  An investigation of the affairs of Quick by the liquidator disclosed a shortage of funds of almost $4 million in the financial year ending 30 June 2013.

Danny did not disclose his interest in DJ to the Quick board.  Although Amy, Barak and Chan knew about Danny's interest in DJ, they did not raise this issue with Danny because they believed that Danny was acting in the best interest of Quick.  As early as November 2012, Amy, Barak and Chan had a suspicion that Quick was unable to pay the large number of unpaid bills but they believed such debts would occur in the ordinary course of business.

Advise the liquidator on both (a) and (b):

(a)  Has any of the directors of Quick breached their duties to the company under the general law and the Corporations Act 2001 ?

(b)  What remedy, if any, may the liquidator seek against the Quick directors?

Managing Director of Quick Mr.Danny, as a result of indulging in nefarious activities has caused the company Quick losses amounting to an estimate of $3 Million. On the grounds mentioned subsequently (and on any other grounds, if they are found to exist in the course of further investigation by the Liquidator and which have directly or indirectly caused any monetary losses to Quick Ltd.), he should be made liable to make good those losses to the company. As stated in the case of Pilmer v. Duke Group Ltd[1], a Director owes a fiduciary duty to the company, which he has so violated in the case at hand.

Mr.Danny acted against the interests of the company

Managing Director of Quick Ltd. Mr.Danny, on the account of serving his personal interests has acted against the object of the company. He has involved the company in a situation in which his direct interest has conflicted with the interests of the company, resulting into losses worth $2 Million.Section 181 of the Corporations Act 2001[2] states that every Director has a civil liability to act in the best interests of the company.A bare perusal of facts shows that in July 2012 Quick purchased a vineyard in the Hunter Valley Region in NSW from DJ Pty Ltd. The only shareholders of DJ Pty Ltd. Were Mr.Danny and his wife Ms.Jenny. It was known to Mr.Danny that this transaction, due to the potential realization of the vineyard upon resale, would result into losses to the tune of $2 Million. Despite this knowledge he acted against the interests of Quick and proceeded with the transaction. Mr.Danny should have made full disclosure of not only his interests in the company but also in the transaction and the likely loss which would accrue, to the other Directors on the Board.

Mr.Danny has attempted to achieve and achieved undue gain to himself and his relative

Mr.Danny, by indulging in the aforesaid transaction of buying and selling of the Vineyard in question, has sought to achieve undue gain to himself and his wife. He, despite being in possession of the knowledge that the realized value of the Vineyard would estimatedly be $2 Million, which was $2 Million less than its purchase value, proceeded to make the transaction without disclosing essential surrounding facts that

As a result, Mr.Danny is liable to pay an amount equal to the gain to his company i.e. $2 million. Additionally, he is liable to pay an additional penalty for contravening the provision of the legislation enumerating the Duties of the Director of a company, if such a penalty is prescribed therein. Section 182 of the Corporations Act 2001[3] mentions that no Director should use his position to gain advantage for themselves or someone else.Mr.Danny has contravened this provision.