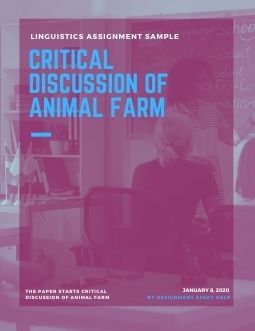 You can download the sample Linguistics essay on report on Critical Discussion of Animal Farm with the following question for free at the end of this page. For further assistance with Linguistics Assignment help, please check our offerings in Economics assignment solutions. Our subject-matter experts provide online assignment help to Economics students from across the world and deliver plagiarism free solution with a free Turnitin report with every solution.

Animal Farm is the political satire based on the Soviet Union which got published in 1945. Orwell himself accepted that his purpose was to fight against totalitarianism in effect to the Russian political issues and socialist movements there. Orwell has been a socialist who tried to establish socialism by ridiculing the people who accepted Soviet myth without criticizing its effects. Through this, he meant the leftist intellectuals.  It basically means about the myth that Stalin’s reign of totalitarian rule and his dictatorship was, in turn, a socialist regime.

Animal Farm analysis  is frequently used in university courses as a satire of power that targets beyond the specific state and historical context mentioned in the book. Some of the major themes that have been discussed in the novella are satire, religion, tyranny and false allegiance. Satires are defined as an art where the writers attack what they see as human folly (LeBoeuf, 2007). Orwell discovered the popular English satire written in 1726, Jonathan Swift's Gulliver's Travels. His book, like Gulliver's Travel, attacks the prominent follies of his time. Napoleon is shown as a person who