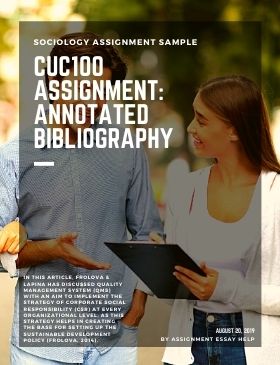 • The readings should appear in alphabetical order according to the author's surname. This means that they order they appear on Learnline is not necessarily the order they must appear in your assignment. Read Chapter 6 of your text (Rolls, N., & Wignell, P. (2015). Communicating at University: Skills for Success, Darwin: Australia, CDU Press) and do the activities.

• Think of your Final Essay (Assignment 4). Approach this assignment as the beginning of your research for your essay. It is meant to develop your critical reading and research skills, as well as help you begin your search for academic references on essential components of workplace citizenship;

• See below for an example of how to write your Annotated Bibliography (including organization and formatting).

In this article, Frolova & Lapina has discussed quality management system (QMS) with an aim to implement the strategy of corporate social responsibility (CSR) at every organizational level, as this strategy helps in creating the base for setting up the sustainable development policy (Frolova, 2014). They have considered QMS and CSR tools for achieving sustainability and organizational excellence (Frolova, 2014). Implementing CSR in the organizational policy supports in enhancing the employees well-being and enhance the process quality (Frolova, 2014). They have selected academic publications, and logical and comparative analysis for attaining the result through the survey as well as a statistical method of employee rotation (Frolova, 2014). In order to explain the CSR, various concepts are selected such as social performance, social responsibility, corporate citizenship, as well as sustainable responsible business (Frolova, 2014).

Frolova & Lapina has discussed the International Organization for Standardization (ISO) 26000:2010 guidelines that are implemented in most of the companies as its impacts on the decisions as well as activities on both environment and society by its ethical behavior (Frolova, 2014). They have stress over the CSR perspective, as the demands in the society is increasing, and therefore awareness about the CSR strategy is important to respond towards the expectations of the society that review the stakeholder’s interest (Frolova, 2014). They have even mentioned that through CSR activities in the company for a long period of time, the organizational cost is reduced, employee's loyalty is increased and overall process performance quality is improved (Frolova, 2014). Therefore, quality management system framework comprises of CSR activities, policies, strategies, and culture at all levels of the organizational management, and act as the base for setting up the policy of sustainable development and continuous improvement of the system (Frolova, 2014). Quality management system is the key to achieving organizational excellence, which can give valuable contribution in the well-being and development of the society (Frolova, 2014).