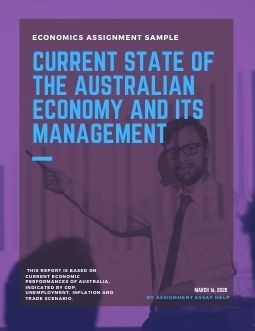 Write a report on the economy and policy in Australia?

Australia is a promising and developed country. Australia’s economic performances are impressive but if the detailed analysis is done then some problems, some probable symptoms for future economic depression will be noticed (McTaggart, Findlay & Parkin 2012). In this report, this type of macroeconomic analysis will be done intuitively. These four indicators can be treated as four major macroeconomic variables. These can predict current Australia’s situation. Now, the whole world is the globalized world. Therefore, the external sector is much more important for the economic analysis of a country. Here, some logical intuitions are explained with some empirical evidence. One interesting aspect of this report will be finding a negative relationship between inflation and unemployment in Australia. It is a powerful notion in macroeconomics. The data on inflation and unemployment from 2005-2015 will be presented here to explore these dimensions. Then the economic interpretation will be drawn. Therefore, this report is based on current economic performances of Australia, indicated by GDP, unemployment, inflation and trade scenario. The GDP, the unemployment, and the inflation are developing the internal sector analysis whereas; the trade scenario is concentrating the external sector analysis of the Australian economy for this report.

GDP, unemployment, and inflation are three core factors controlling the economic balance, and these are needed to be discussed accordingly. The GDP is the sum of the product produced in a particular year within the boundary of that country. GDP is an important indicator of economic growth (Weber & Metaxas 2016). Australia’s current GDP growth rate is 0.5% which was 1% in the previous year. It is well observed from the data that the Australian economy always experiences an upward trend in GDP growth. This phenomenon is one reason that Australia is known as a developed economy, though increment in GDP does not necessarily imply economic development; it can be taken as a proxy measure of it (Jordà & Taylor 2016). In this year Australia’s GDP growth rate falls slightly because of the downturn in Australia’s agriculture and mining industries. Here, a relationship through a diagram between GDP and Unemployment will be explored to examine whether Okun’s law holds for the Australian economy or not (Argy & Nevile 2016). Okun’s law shows a negative relationship between unemployment and GDP in an economy.