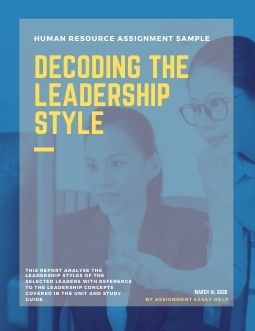 Write an essay to analyse the leadership styles of the selected leaders with reference to the leadership concepts covered in the unit and Study Guide?

Barack Obama, the 44th president of the United States of America is a man who has broke many conventions (Bonilla-Silva 2009). He’s the first African American president and also the first president to be born outside the continental United States. His presidency single handedly brought the issue of race – especially in America – into the mainstream (Parameswaran 2009).Born to a Kenyan father and mother from Kansas, Obama is the epitome of the American middle class values – relying on hard work and education to move ahead in life (Obama 1995). His personal story and rhetoric skills are inspirational but he’s also one of the most scrutinized leaders of our recent time. A part of it is because of the historic juncture at which he took over the Presidency of the United States of America. He inherited an economy that was reeling under recession – arguably the worst economic period in modern history since the great depression (Ohanian 2010). Many predicted his downfall, simply because of the burden of expectations and the promises that Obama set during his first presidential campaign. 8 years from 2008, he’s still the president of USA and has successfully thwarted all the odds and criticism against him.
Many argue that Obama’s leadership is more restorative than transformative. He didn’t shake things up for the heck of it. His leadership style is rooted in pragmatism (Mitra 2013). Most president’s legacy is etched by the transformative policies that they usher in with their presidency but Obama’s most policies are a continuation of previous eras. It’s easy to get swayed by emotions in turbulent times, and very little credit is given to Obama’s ability to resist the temptation of introducing disruptive policies for the sake of being disruptive. He was in charge of a world that was at the edge of collapse, and his job was to restore and heal the cracks in the economy. His plans and policies were all aimed at having a sustained and robust recovery. He’s a leader who clearly understood the gigantic problems of his time and put the interest of the economy over his legacy.  This doesn’t mean that Obama does not possess a transformative style as a leader (Gliem 2008). He came to power because he demonstrated the potential to transform the economy and the country. He motivated the whole nation to look beyond race politics and ideology and infused hope at a time when the whole world was going through one of the bleakest periods in history (Bligh & Kohles 2009)……………