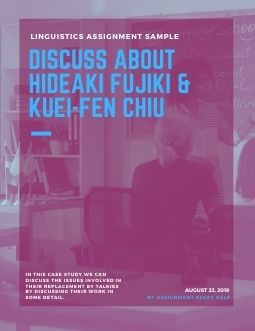 You can download the sample Linguistics case study on Cinema Journal with the following question for free at the end of this page. For further assistance with Linguistics Assignment help, please check our offerings in Linguistics assignment solutions. Our subject-matter experts provide online assignment help to Linguistics students from across the world and deliver plagiarism free solution with a free Turnitin report with every solution.

The transformation in the life and status of benshi started in the 1920s when another movie magazine, Kinema junpo used to show either European or American movie star as its cover picture from the very first issue published on 11TH July 1919. We can discuss the issues involved in their replacement by talkies by discussing their work in some detail. Benshi performance was a commercial attraction but their formation depended not only on their acting but also on their social relations. When Tokugawa Musei, a famous benshi, narrated Civilization in 1917, benshi's social status changed extremely. At the first place, benshi manipulated their body and used their voice to narrate the story, this made them marketable commodities, but with only a little respectability. At the second stage, when the Government administration and film industry tried to institutionalize them as film narrators and educators, the result was ironical[1]. Some of the benshi gained popularity and respect by this means but the licensing was not easy for all (Chiu, 2012:91). It started testing the benshi whether they were able to educate people or not. In doing so, the police came to know that there were many benshi who were vulgar and rough in their manner. Thus they were criticized and were not licensed to work. By 1936, these live performers were replaced by talkies for they were disqualified as educators.

Many scholarly works have contributed a lot to our understanding of benshi. The recent studies done by Gerow and Dym reflected the shift of benshi's social status in a historical context. Noel Burch and Joseph L. Anderson described benshi's performances as a distinctive trait of Japanese cinema. Gerow emphasized on the critical discourses for the shift. Their excessive roles stretched beyond narration was subordinated also because of the production-centered film industry. Their most important characteristic was their autonomous presentation on the screen. The benshi became a prime reason for the people when Somei Saburo joined Denkikan in 1903, the first permanent playhouse of motion pictures. They explained the film before the screening with their body. Dym presents that their vocal qualities were of various tradition arts (Fijiki, 2006: 71). Their voice impersonations were allowed only for domestic films[2]. It generated the emotional and psychological feel of a character in the audiences. Benshi's attraction coexisted with the motion pictures, and when production companies took over, their role was narrowed down. For Gerow rightly points out that early Japanese film industry was centered on exhibition rather than production (Fujiki, 2006:74).

[1] The complexities and irony were mixed for some of them were benefitted by this; whereas others lost their survival means.
[2] The critics tried to limit their role in the foreign films for they considered it a manipulation in the main story line. However they didn't mind their voice impersonation in domestic films.