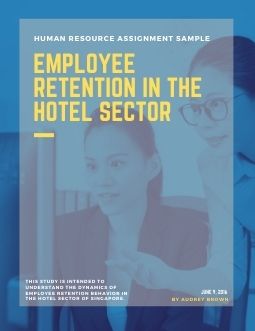 The rationale behind this research is to find out what the hotel sector in Singapore is doing in order to retain their employees. It is important to retain senior and experienced workers in this industry. Retaining positive and motivated staff is vital to a hotels success. A high employee turnover increases expenses and also has a negative effect on company morale, therefore it is very important that hotels management to retain their senior and experienced employees.

This study is intended to understand the dynamics of employee retention behavior in the hotel sector of Singapore. The study holds quite a good significance in the current industrial scenario. By analyzing the specific behavior of the different cadres of employees, the employers at Singapore hotel industry can decide on the future strategy. They can analyze the employee perception and favorability towards the job conditions, and can proactively decide on strategies for decreasing the employee turnover along with improving productivity and profits.

Conventionally, academicians view the origin of the tourism as being influenced by the western cultural experience, which played the dominant part in its development. Thomas Cook, at first propounded the idea of long tours, and, utilized a chartered train for carrying the tourists (Towner, 1995). Cook is widely regarded as the father of modern industry of long distance tourism. Nonetheless, it had also been postulated that tourism's historical roots may be drawn way back almost to the inception of humans on earth. In addition to that, the origination of civilization's span of the history of tourism commenced along-side with the Adam's journey about religious, cultural, heritage as well as educational tourism related to all the races which resided on this earth (Alhroot, 2008). Tour, as a word, was almost concerned with the concept of any journey or a voyage which is utilized in the present world what we know as tourism. Henceforth, there exists no date of origin which accurately determines the inception of pre-industrial (before 1840AD) era of history of tourism in the text books, yet tourism, as a word, found its place in English language only during the early periods of nineteenth century (Walker, 2004).

1.2 Travel and Tourism Industry: A Snapshot

2.1: Travel and Tourism Industry in World

Tourism Industry of the world is such an industry that keeps flourishing all throughout. Tourism industry around the globe is never static, and alternatively can be described as 'ever changing'. An approximate assumption by the researcher of various parts of the world states that the contribution of tourism industry of the world towards the GDP would be in the tune of 10.3% approximately. It is due to the fact that people can now afford their travel overseas. However, for the purpose of meeting the requirements, consistent changes within the travel as well as tourism policies require re framing as well as restructuring (Watch, 2010). The travel as well as tourism, throughout the globe, is recognized as an industry which contributes globally to the economy that includes: direct, indirect as well as induced, among roughly seven trillion dollars (US figures) in the year 2013. Global tourism's contribution, which included transportations, accommodations, entertainment as well as attractions, stood at nearly 2.2 trillion dollars (US figures) in the year 2013 (Portal, 2014). According to the reports published by International Labor Organization, this industry severely remains affected because of economic turmoil globally, yet it is likely to grow at significant pace within the coming years. United Nations World Tourism Organization reported that this sector is expected to facilitate nearly 296 million employments globally by the year 2019 (MercoPress, 2014). In a report published in 2013, UNTWO estimated that arrival of international tourists is likely to reach a figure of roughly 1.8 billion by the year 2030 along with an annual growth of nearly 3 %.

1.2.2: Travel and Tourism Industry in Singapore

Singapore happens to be a premier tourist marketplace which witnesses significant growth in the arrivals of visitors during the time span of 2009–2013. Having tourism as its prime business activity, Singapore, henceforth attracts a huge number of individuals from throughout the globe. The government of Singapore has made consistent efforts to create as well as support the nation's tourism contributions comprise of leisure tourism, tourism related to business and niche sectors like medical as well as cruise tourism (Timetric, 2014). Singapore, along with a record number of visitors as well a rate of arrivals, truly stands out as a favored tourist destination for the year 2013. The statistics registered for the receipts collected by tourist amounted to $23.5 billion (meaning 2% year-by-year growth), during the time when international tourist arrivals reached 15.6 million having 7% growth (Board, 2014).  Currently, tourism is arguably the biggest as well as the most dynamic extrinsic economic activity. The higher rates of growth as well as development, significant volumes in the inflows of foreign currency, infrastructural development as well as the introduction of contemporary management including educational acquaintance actively impact various areas of the economy of Singapore, which undoubtedly made positive contribution towards the economic as well as social development of Singapore (Huen, 1998). One of the biggest contributors in tourism industry happens to be the Food & Beverage sector for casual dining. Singapore, in the word of a tourist, can be described as an amalgamation of various cultures.

1.2.3: Food and Beverages Industry in Singapore

Tourism in Singapore is dependent upon two major sectors. The first one is the travelling and the second one is Food & Beverage industry. The Food & Beverage division of Singapore appears to be well established in the forthcoming years. Efforts are made in the areas in building new attractions, rejuvenating the prevailing places as well as transforming the levels of their service sector to an optimum standard (Wong, 2011). It is due to such steps that Singapore has become one among the most favored culinary destination of Asia, which is also called as the capital of business tourism. Food & Beverage sector of Singapore has been historically adjustable to the developments within the socio-economic environment as a whole. The policies as well as strategies relating to the Food & Beverage industries of Singapore, so far have immensely remained in line with the global forces impacting trends related to tourism as well as economic development, additionally responding towards certain factors like changing city-state social dynamics (Panciera, 2001).

This work mainly focuses to examine the strategies used for tackling manpower constraints in Singapore’s F&B industry for casual dining. In this thesis work, I highlight the employee retention strategies adopted by hotel industries in Singapore. An empirical analysis is carried out to test the hypothesis given; that involves gathering profiles from 80-100 respondents.

The rationale behind this research is to find out what the hotel sector in Singapore is doing in order to retain their employees. It is important to retain senior and experienced workers in this industry. Retaining positive and motivated staff is vital to a hotels success. For this purpose a conceptual research model is devised to measure the employee retention level in hotel industry.

In this research, the following four (4) hypotheses are postulated:

Hypothesis 1:  There is a significant effect of 'turnover rate' on employee retention within hotel industry inside Singapore. ……………..