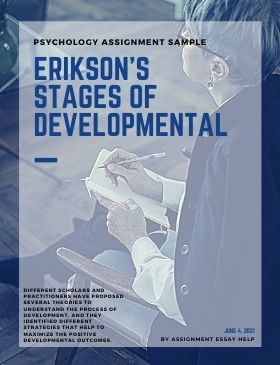 You can download the sample Psychology essay on CUC100 Assignment: Annotated Bibliography with the following question for free at the end of this page. For further assistance with Psychology Assignment help, please check our offerings in Sociology assignment solutions. Our subject-matter experts provide online assignment help to sociology students from across the world and deliver plagiarism free solution with a free Turnitin report with every solution.

You will write a research paper.  It should be at least 3-5 pages, and those 3-5 pages include only the main body of the paper; title pages and citation pages are EXTRA.  The instructor will give you sample topics to choose from, or you may choose your own topic from the textbook.  You must clear your topic with the instructor before you begin writing.  Failure to clear your topic with the instructor will result in a loss of 20 points.    The instructor will keep track of topics in Canvas.  You will include at least 3 sources, APA style.  At least one of your sources MUST BE SCHOLARLY.  Wikipedia is NOT an acceptable source.   You can use websites as sources.  You may NOT cite movies as a source. Your textbook may NOT be one of these 3 main sources.   You may, however, include the textbook as a source if you already have 3 other sources.  Sources are worth 15 points each.  Your paper needs to be in a standard format; indented paragraphs, 12 point type, 1-inch margins, double-spaced.   This should be sent to the dropbox so that I have an electronic copy.   150 points.

Several theories are proposed by various scientists to explain human development. Every individual has a different combination of biological forces, psychological forces, sociocultural forces and life-cycle forces (Kail, & Cavanaugh, 2015). Development is a revolutionary series of modifications that arise in a predictable pattern due to the interaction between biological and environmental factors. Some factors control the intelligence of an individual, while others determine the personality of an individual. Different scholars and practitioners have proposed several theories to understand the process of development, and they identified different strategies that help to maximize the positive developmental outcomes. These principles help to determine the difference between normal and abnormal development. Health care professionals contribute to human development as they play a significant role in the environment of the patients and influence the patient’s life in both a positive and negative way. Learning the developmental process helps the health care professionals to help the patients or individuals to manage their lives and promote optimal development for optimal health. In the present article, we will discuss Erikson’s stages of development (Kail, & Cavanaugh, 2015).

Erikson’s Theory of Development: Erik Homburger Erikson is an American developmental psychologist who was born in Germany in the year 1902. During his childhood, he experienced an identity crisis, and He believed that most of the personality development of an individual starts in childhood. He employed the characteristics of a philosophical viewpoint in understanding the personality of an individual. Though Erikson’s ideas were influenced by Freud’s theory, he did not accept that most of the development occurred in childhood. He rather believed that development is a continuous process throughout the lifespan of an individual. Unlike Freud, Erikson did not place much emphasis on sexual urges; rather, he emphasized the social and cultural influences. Moreover, Erikson’s ideas were based on healthy people, whereas Freud’s studied individuals with mental illness (Baltes, & Schaie, 2013).

Erikson proposed a psychosocial theory of development and considered the social interactions at each stage of development. He stated that each pass through eight stages of development, and each stage involves a core conflict that may impose a positive or negative resolution. These eight conflicts occur in different forms across the lifespan. Trust Vs. Mistrust is the early conflict experienced by an infant, which may be resolved poorly in infancy if there is a lack of an effective mother-infant relationship. However, the supportive and healthy relationship in later life will develop greater trust in individual (Vogel-Scibilia, McNulty, Baxter, Miller, Dine, & Frese, 2009).

Identity crisis is the most prominent crisis in Erikson’s theory. Erikson himself identified the identity crisis during his childhood and adolescence. His personal experiences have affected the developmental theory, which he has later envisioned and proposed to the world. According to Erikson, the development of identity is the primary task for individuals during their adolescence. A healthy identity can be developed if the teenager experiences alternative possibilities and reflects alternative identities (Perry, Hassevoort, Ruggiano, & Shtompel, 2015).

Erikson’s theory was influenced by the external factors, society, and the parents’ of an individual. According to him, every person should pass through a sequence of eight interrelated stages over the entire lifespan.

Trust versus mistrust: It is the first stage of development that is experienced during the first year of birth. During infancy, children form a trusting relationship with the parents and adults, or they do not develop trust. Lack of long-term interaction with an adult or patent who can be trusted to meet an infant’s needs results in mistrust. Maintaining proper eye contact and touch with the infant will develop optimism, trust, security, and confidence (Allen, et al., 2013).

Autonomy versus shame and doubt: An individual pass-through this stage approximately during the second year of birth. The toddlers begin to do things independently, such as feeding and dressing; thereby, they establish autonomy, and a part of it is self-controlled. During this stage, the children may experience conflict over toilet training. If the children are unable to establish self-control and autonomy, they develop the feeling of shame for not being independent and doubt themselves (Allen, et al., 2013).