Essay Based Assignment On Urban Structure And Dynamics - Skip to content 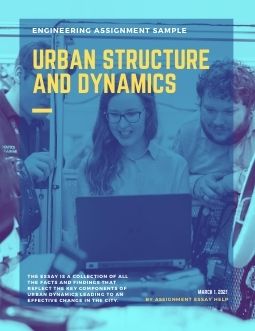 Identify and reflect upon the key components of urban dynamics that effect change in the city. This identification and reflection may include (but is not limited to) discussion on patters of settlements, the historic evolution of cities, the internal forces that contribute to a city, the forces that stimulate or shape change, and/or efforts to anticipate, manage and influence the future of cities.  Conclude with some brief observations on current and emerging challenges that you think are likely to confront cities (locally and internationally) in the next couple of decades.

The essay is a collection of all the facts and findings that reflect the key components of urban dynamics leading to an effective change in the city. The essay also throws light on the settlement patterns of the city dwellers, how cities evolved into what they are at present, the internal forces contributing towards the functioning of a city, the forces behind the functioning of cities and shaping them into futuristic modern marvels (Aier and Kithan, 2015).

The rising population and the need to advance in the society have always caused the man to expand or migrate his living settlements towards a more modern establishment often termed as the city. This city has been considered to be a land of opportunity providing better housing, food, shelter and status to men. But as no monument was built in a day, it took years for a city to come up, get inhabited, start supporting civilization, and grow further to transform itself into a modern marvel.

To analyze the effect of urban dynamics on cities one must take into consideration certain factors that can be used as the deciding factor for these effects (Analyzing Land Use Change In Urban Environments, 2015). Some of these factors are as follows-:

A booming world population leads to an increase in the demand for land. If one looked at the land use pattern about half a century ago, one might find the land under use was pretty small as compared to what it is now at present. One might observe a lot of natural habitats like forests, wild life, water sources, etc. But the constant increase in human population has decreased this to a great level. Large chunks of forests have been cut down to build commercial, as well as residencies for mankind. Water sources have started to deplete because of the increasing demands. This land use pattern surely throws light on the transformation or the urban dynamics of cities (Bangkok Urban Dynamics and Housing Market, 2015).

During the primitive era before cities, even came into existence, the only and most popular methods of transportation were water routes. Hence, a lot of wealth was used for maintaining boats and ships. But as soon as cities came into existence, better roads and infrastructure became to develop, people performed commuting via cars and buses. Gradually railway tracks started to span across nations covering even larger distances and providing even faster means of transportation. As cities further became advanced, better infrastructure gave birth to bridges, flyovers for even smoother connectivity. Trains evolved into metros, subway and monorail to provide faster transportation for even shorter distances. Air transportation, even further caused the urban dynamics of cities to become global by providing even faster means of transportation and connecting cities of even different nations and providing access even beyond continents.

Before cities began to emerge, one could see large pastures of land spanning with abundant flora and fauna. Clean air and water for everyone are how one would describe the environment back then. But as colonization began, large land, pastures were cut down to create colonies that could support the needs of the emerging human society. Factories, industries, houses, schools, etc. began to take shape and to cause a lot of pollution in the environment. The amount of contamination and waste that these rising cities bring to the environment is heavy, and they continue to deteriorate it's pristine. As more cities tend to develop, more flora and fauna get displaced from their natural habitat, causing a lot of turmoil in the environment and disrupting the natural balance of Mother Nature (Capello and Nijkamp, 2004).