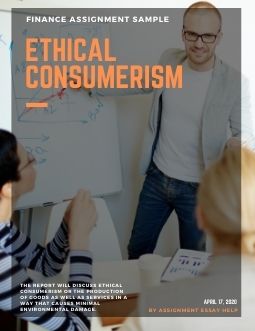 Write an analytical business report on what ethical consumerism means for businesses? Choose a company and explain and analyse how they operate ethically. This must take into account the ethics and values of the company you choose to focus on.

The report will discuss ethical consumerism or the production of goods as well as services in a way that causes minimal environmental damage. Due to the increasing coverage by the social and various other media regarding ethical consumerism, the consumers of today are becoming more aware about the practices which the companies are following for the production of their goods and if these practices are found to be unethical, the consumers start boycotting the goods of that company as a mark of protest. Coca-Cola which is the largest producer of nonalcoholic beverages in the world is one such company which has been found to be involved in unethical practices while producing goods. There is prominent disregard for the labor involved in production throughout the world and their advertising campaigns have been misleading the company. Primary research on the 10 students of GSM London indicated that the buying behavior of the consumers was influenced by a number of factors. The structure of the report comprises an overview as well as the analysis of ethical consumerism, review of the ethical practices of Coca-Cola Company, opinion survey, critical evaluation of ethical consumerism and the recommendations for Coca-Cola so that it can adopt practices that are ethical for the production of goods.
Ethical Consumerism:
Ethical consumerism may be described as a practice under which the products as well as services are produced in such a manner that the environmental and / or social damage is minimized and the products and services that are deemed to have an impact on the environment or society in a negative way are avoided business (Ferrell & Ferrell, 2009). A growing number of consumers are resorting to buying ethical products and therefore the companies are also resorting to ethical marketing (Audi, 2009). The consumers trust the brand if the organization’s has produced it through ethical practices (Noel, 2009). This insight into consumer behaviour help the organisations to form strategies (Blythe, 2013)…………….