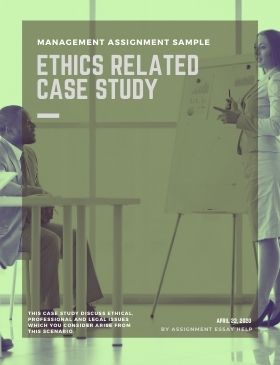 Case Study 1 – Diane the Consultant
Three years ago Diane started her own consulting business. She has been so successful that she now has several people working for her and many clients. Their consulting work includes advising on how to set up corporate intranets, designing database management systems, and advising about security.
She is currently designing a database management system for the personnel office of a medium- sized company. Diane has involved the client in the design process, informing the CEO, the director of computing, and the director of personnel about the progress of the system. It is now time to make decisions about the kind and degree of security to build into the system. Diane has described several options to the client. Because the system is going to cost more than previously planned, the client has decides to opt for a less secure system. Diane believes that the information they will be storing is extremely sensitive. It will include performance evaluations, medical records for filing insurance claims, salaries and so forth.
With weak security, employees working on client machines may be able to figure out ways to gain access to this data, not to mention the possibility of online access from hackers. Diane feels strongly that the system should be more secure. She has tried to explain the risks, but the CEO, director of computing and director of personnel all agree that less security will do.
What should she do? Should she refuse to build the system as they request? Briefly discuss the ethical issues in this case study. You should be able to make some recommendations as to how this ethical problem may be resolved. Be sure to support any recommendations with reasons informed by your research and analysis of the ethical issues identified in your discussion.
Case Study 2 – Conflict of Interest
Nirmal is the IT manager in a government department with more than 500 staff members and six branches across Australia. His department has decided to acquire an enterprise resource planning (ERP) system. A request for proposal (RFP) for the procurement of the software has been advertised in a number of Australian newspapers. Two local companies have responded to the advertisement and have sent their offers to the department.
When Nirmal has examined the offers, he has found that Company A’s offer is slightly better than that of Company B. To his surprise, Company B’s offer has been made by Devraj, who is his best friend, and the general manager of Company B.
Although the initial cost of Company B’s software appears less than that of Company A, Company B’s software may require some modifications which could eventually increase the total cost.
To complicate matters, Nirmal has received a phone call from Devraj, urging him to favour his offer as he needs this work.
Discuss briefly how Nirmal’s friendship with Devraj causes an ethical problem. Follow your brief discussion with a recommendation on this issue. Be sure to support this recommendation with reasons informed by your research and thinking on the ethical issues identified in your discussion.
Case Study 3 – Copyright and Intellectual Property Considerations
Anna is a young ambitious programmer working for a small company developing software for web- based services in the health area, with a focus on supporting remote aboriginal communities. To further her career Anna undertakes additional tertiary study, with support from her manager Brian.
This study includes topics covering computer ethics, and issues related to the impact of ICT on different communities. On her current project, Anna develops a new user interface, which has a strong focus on accessibility for remote communities, especially considering the type of technology likely to be used. She also pays special attention to the use of cultural images in the interface, she has to avoid those which may be distressing or offensive to aboriginal users.
The new system is a great success and Anna’s contribution is recognised by her company, through an Employee of the Month Award. The company also receives a national business award for its contribution to the positive use of ICT in aboriginal communities.
Brian takes all of the credit for this, and Anna receives no acknowledgement for her efforts.
Discuss briefly the ethical issues related to this case. As a result of your discussion, you should be able to make some recommendations as how this ethical problem may be resolved. Be sure to support any recommendations with reasons informed by your research and thinking on the ethical issues identified in your discussion.
Assignment Task
From what you have learned during Weeks 3 and 4 of your Professional Environments Course, discuss ethical, professional and legal issues which you consider arise from this scenario. Make some recommendations of actions which could be taken to resolve the situation and/or to minimise the chance the scenario may recur. Support your answers with relevant references (as well as the Codes and Laws).

THE SITUATION AT HAND
This short case study is an example where there is clear clash of interests between an organization and its employees, with a third party, Diane, caught up in the middle. The organization represented by the CEO, director of computing and the director of personnel, all favors a database solution which can seriously compromise the security and confidentiality of the data of the employees, at the supposed benefit of incurring a lesser cost. Diane, the designer of the database system, foresees security problems but is unable to convince the bosses about the same…………………………….