Evidence of an understanding of clinical governance - Skip to content 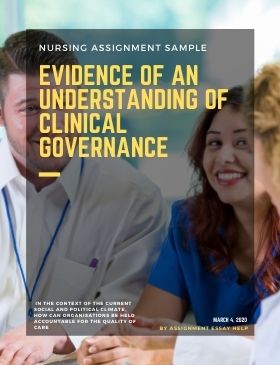 In the context of the current social and political climate, how can organisations be held accountable for the quality of care?

Singapore is a parliamentary democratic nation which got its independence from the British in 1959 and from Malaysia in 1965. The Singaporean healthcare reform dates back to 1960. Post-independence it introduced user fees and decentralization of primary care from the overcrowded general hospital. Before 1960 healthcare was mainly funded by the government. In 1983, a National Health Plan was unveiled that included construction of hospitals and developmental programme and a novel health funding model. The importance was laid on responsibility of the individual and the State as the last recourse. These approaches were aimed at raising the quality of healthcare service delivery in the country. (Okma, et al., 2010)

In 1976, the political leadership withdrew from Social International. The government emphasized personal responsibility for own welfare. By 2000 public hospital and specialised medical centre were corporatized which raised the hospital expenditures and caused inflation of the cost of healthcare.  The government intervened and created two groups of ‘Singapore Health Services’ and ‘National Healthcare Group’ whereby integration was achieved both vertically and horizontally of all public sector healthcare providers in the primary, secondary and tertiary levels. This resulted in curbing the overall waiting time for elective surgeries with a recent survey showing 80% of overall patient satisfaction. (Lim, 2004) In Singapore, the main sources of funding for healthcare are employer benefits, government subsidies, and out of pocket expenditure. (Okma, et al., 2010). The ‘National Clinical Assessment Authority’ has been established to evaluate the clinical performance outcomes of all the consultants. The Commission for Health Improvement conducts visit programmes to each healthcare institution to keep a watch on the quality of care and appropriateness of systems. Quality inspections are conducted once in every four years and reviews of individual organizations are made publicly available. In hospitals, health managers have been given the responsibility to identify issues in performance and take appropriate actions to deal with poor performance. These procedures are intended to support staffs proactively and provide enabling environments. Sometimes these procedures may lead to an investigation which may lead to dismissal of healthcare staff. (Zahir, 2001) The government encourages competition among institutions and publishes hospital bills along with their quality indicators on the website to promote consumer choice in the selection of healthcare service provider (Okma, et al., 2010).…………..