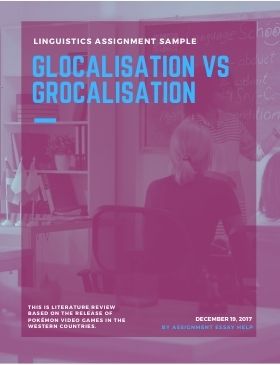 Write a 1000 words literature review on Glocalisation vs Grocalisation.

This is literature review based on the release of Pokémon video games in the Western Countries. The dichotomous examples of 'cute' as well as 'cool' shaping the Pokémon's zeitgeist (Iwabuchi 2004) instigate discussions about the culture including the perception of Pokémon's game amongst the scholars. By closely observing Pokémon's art, the complexity of the rhetoric of design could be understood, which fluctuates between the extremities of 'cute' (Japanese) as well as 'cool' (American) (Iwabuchi 2004).

(Iwabuchi 2004), outlines the American version of Pokémon was prepared by US Nintendo for the global distribution, many requests concerning Pokémon's futuristic designs were brought in, yet rejected ultimately by the producers (Japanese) (Iwabuchi 2004). NOAs reformatting of Pokémon suited for the audiences of Western countries have been understood as well as documented thoroughly (Allison 2006), yet the denial for compromising upon the aboriginal designs indicates that such type of Americanization is never fulfilling[1], instead it is negotiated, within which the visual interpretation is extremely important as long as the protection of character design is concerned (Allison 2006). A particular point to note about this essay is that it seriously takes into consideration the point upon which there happens the collision of commodity as well as concept of design (Iwabuchi 2004), and looks further to such character drawings, thereby paying close attention for understanding better about the fact they could reveal about the Pokémon, apart from the popular assumptions as well as the archetypal analysis of the fandom as well as the fads (Allison 2006).

This essay is very critical about Pokémon, which happens to be one among the largest as well as extremely profitable media franchise throughout the globe. Pokémon has a virtual presence in all major forms of media, be it animation, films, television, video games, etc (Allison 2006). The basic pillar of the universe of Pokémon happens to be a series of video games, which is created for the handheld devices of Nintendo. The first version was the 'Gameboy', after which the Pokémon DS games were launched upon different hardware systems, which in turn, usually derive the franchisee's characters into the context of new game plays, emphasizing an altogether distinct facet involving the hugely consistent as well as the continuous universe of Pokémon (Allison 2006).

In a wider framework involving the cultural consumption, (Okayama 2005), made a claim that 'anime' happens to be a part of the global curiosity in the pop culture of Japan, famously noted as ‘J-pop’. This essay discusses the examples of the ‘Tokidoki’ brand created by 'Legno', who derived the inspiration for creating that design from the portrayal of younger girls of Japan in anime as well as manga. The immense success of childhood fantasies, such as ‘Tonari-no-Totoro’ 'My Neighbor Totoro', developed further global curiosity during the years of the 1990s (Ueno 2002).

The most prominent talking is gendered Orientalism, which could easily be noted in the absenteeism of the male character on the website as well as the products of 'Tokidoki', masking the existence of its male founder (Okayama 2005). Both Murakami, as well as Legno, have acquired the strange association involving innocence as well as sexuality by facilitating glamorous frames to the cute anime or the manga faces. The non-appearance of any male figure gives an indication that inequalities in the gender viewpoints at both the creator as well as audience level do exist. In the works of Murakami as well as Legno, we always find any women or cute puppets representing the objects of kawaii (Okayama 2005). It indicates a perception that, as men are the creators as well as viewers, they are not a part of the feature. Females are being the subjects of the fantasies as well as desires, which men desire to possess. What remains a surprising fact is that women being the subject as both the object as well as the viewer too are in a constant desire of being possessed as well as possess the images also (Ueno 2002). This primary perception of Tokidoki remains consistent along with the extremely profitable 'commoditization[3] involving 'radicalized' as well as 'sexualized' portrayals typical of modernized fashion' (Matthew 2007), in addition to the 'trajectory involving Western racial as well as sexual imagery throughout the turf of the body of a female.

[1] There was a constant difference of opinion in the traditional design and modernist interpretation.

[2] Information capitalism is the increasing significance of information within capitalism under the conditions of globalization as well as rapidly technological development.

[3] Commoditization here signifies to change a living thing into an object for the purpose of deriving profit………….