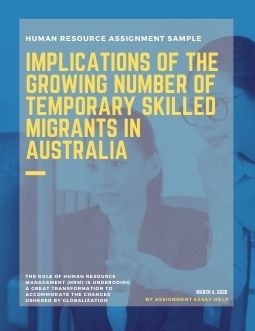 In an effort to overcome skill shortages during the past decade, many Australian organisations have opted to employ temporary skilled migrants (457 visa scheme), contributing to the diverse nature of their workforce. The employment of these workers has significant human resource management implications that must be identified and appropriately acted upon by HR Managers if it is to be an effective staffing strategy. Discuss?

Human resource can be a source of long term competitive advantage for any organization and it also helps to achieve primary goals such as profitability, customer satisfaction, and sustainability (Prahalad, 1983) .The role of Human Resource Management (HRM) is undergoing a great transformation to accommodate the changes ushered by globalization (Bradley, 2014) . On one hand it has opened up a large talent pool of skilled workers (both permanent and fluid) but on the other hand it has brought with it the challenges that comes with cultural diversity (Kapoor, 2013) . Australia, however is an exception, in the sense that its linguistic, cultural and social diversity has always been restructured over the years with its migrant population – as of 2015, a staggering 28.2 % of the country’s population was. Hence, human resource managers in Australia are not new to the pressures of globalization. This however, does not mean that their task is any easier compared to other developed countries. Australia is a vast country with abundant resources and low population density which makes relationship between the country and its migrant population a symbiotic one. 457 visa, renamed as temporary work (Skilled) (Subclass 457) in 2012 is the most commonly used program for migrant workers to find temporary work in Australia – it’s also a route to obtain permanent residency status in Australia (Melbourne Migration, 2016) . However, in the last few years there has been a surge of migrant population migrating to Australia for work through the 457 visa scheme. The sudden increase of migration has also given rise to backlash against the migrants by the residents in many developed countries. Canada and Australia are the only two countries that have managed to have sustained public support for newcomers in their country (IP, 2016) ………………