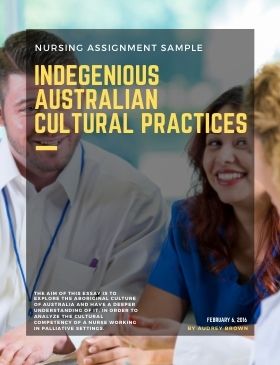 You can download the sample Nursing case study on Critical review of case in Health management with the following question for free at the end of this page. For further assistance with Nursing Assignment help, please check our offerings in Nursing assignment solutions. Our subject-matter experts provide online assignment help to Nursing students from across the world and deliver plagiarism free solution with a free Turnitin report with every solution.

1) Introduction- Includes an expertly constructed aim,  and provides an exceptional, clear, comprehensive and concise overview of all major concepts and issues to be addressed in the body of the work.

3) Application/analysis-discussion conveys consistent evidence of synthesis being applied to how the nurse would provide culturally appropriate palliative care to a patient and their family. Discussion should expertly supported by current academic research, with superior grasp of current knowledge related to topic evidenced.

4) Conclusion– essay should provide an exceptional, clear, concise, well organized conclusion which expertly and succinctly summarises all the main points raised in the discussion paper and draws this together in an outstanding manner.

The aim of this essay is to explore the Aboriginal culture of Australia and have a deeper understanding of it, in order to analyze the cultural competency of a nurse working in palliative settings.

This essay will mainly explore different cultural practices, norms, and traditions that take place in the indigenous people of Australia during dying and death ceremonies. The indigenous people of Australia have several rituals and ceremonies when it comes to dying and death. They believe in religion and everything has a religious notion to it in these groups. It is also important to know that all indigenous people do not follow these ceremonies strictly. The essay will then evaluate and analyze that how a nurse can follow neutral values and provide an apt palliative care. It is one of the most important settings in the medical profession because the patient requires maximum comfort and easy environment. The role of nurses is extremely important in such scenarios and they have to be very particular for their task and roles in a palliative setting. By having cultural competency the nurse can do justice to his/her role and ensure good practices for the patient. Gaining cultural competency is explained in the final sections of this essay.

Aboriginal culture is one of the oldest cultures present in the world today, which has survived in the ever changing world. The tribal population of Australia is a mix of diverse groups that is composed of several cultures, kinship, living conditions and languages. It can be complicated for a nurse to understand this culture because of the diversity and numerous values that they hold. Thus, providing palliative care to these people can be a difficult task.

When it comes to death, dying and mourning, the indigenous people of Australia have different cultural practices and notions from other Australian groups. They have several religious ideologies that accompany death and dying in their culture (Korff, 2015).

Research suggests that while dying, indigenous people of Australia want to remain in their homeland and live their last few days in the comfort of their homes (AIHW, 2011). In fact, the aboriginals follow modern technology and palliative help that helps the people to live peacefully in their last hours (Korff, 2015). It was also seen that using the modern health care services, the indigenous people experience minimal violence, less drinking, petrol sniffing and drug abuse (Mckinlay, 2014). Hence, by staying in their homeland and using modern technology at the same time helps the indigenous population to enjoy the best of the both the worlds and they follow the medical advice easily (AIHW, 2011).

The death ceremonies of indigenous groups are totally based on religious implications as they are extremely religious and spiritual (Korff, 2015). They do not believe in Gods, but deities whose images are constructed in the form of some recognizable symbols such as rock, plants, shelter or an animal (Korff, 2015).  One of these deities is the 'Ancestral Beings', who are believed to be the direct ancestors of people living in the present times. In spite of being ancestors of humans, the ancestral beings are usually symbolized in the form of plants, animals or rocks (Korff, 2015).  This is because indigenous people believe that human reincarnates in different living forms, so they can either be a plant or an animal or a rock. During the time of funerals, indigenous people have several notions and ceremonies wherein, they paint themselves in white color and cut their bodies to show grief and take part in a number of songs, dances, and rituals (Korff, 2015).  They think that such practices would help the spirit of the dead person to leave that area and return to its birthplace to reborn (Korff, 2015).  The burial ceremonies of these Australians are also divided into two parts. The first part is the primary burial whereby the corpse is kept on a wooden block, which is left for several months after being covered with branches and leaves (Korff, 2015). It is left to rot and continue with the secondary burial where people collect the bones, paint them with red ochre and dispersed. The indigenous people do not say the names of dead people because they believe that by saying their names of voicing them, the spirits of the dead will get disturbed (Korff, 2015).

It has now become a personal opinion and practices vary from place to place (Australian Health minister’s advisory council, 2010). For instance, the northern territories of Aboriginal culture in Australia have strict religious values and people still follow traditional ways of life and death (Tschudin, 2010)……….