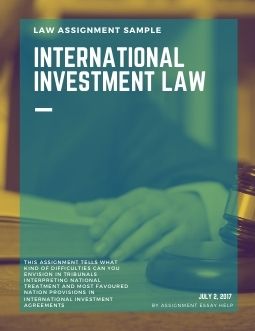 What kinds of difficulties can you envision in tribunals interpreting national treatment and most favoured nation provisions in international investment agreements (IIAs)?  In particular, how might the concept of ‘likeness’ be problematic?

MFN is a type of protective clause found in economic treaties which obligate the signatories to the treaty to treat the recipient nation of such treatment at par and in the same manner and receive the advantages as the 'most favored nation' by the country granting such treatment. The MFN clause has existed since the 12th century however this harmless clause which is like a 'Trojan Horse' in an economic treaty has in recent years opened a Pandora's Box. With regards International Investments Agreements (hereinafter IIAs) post the Maffezini v. Kingdom of Spain[1].

Disputes are heard by a variety of tribunals, which often are constituted for the purpose of hearing a single claim. The range of commitments is wide and not precisely defined, allowing expansive interpretations by arbitral tribunals. The jurisdictional ambit is broad and not precisely defined. Its reach would depend on the interpretative approach taken by the arbitral tribunal in a given case. A tribunal is likely to assess, based on its own view and preconceptions but without regard to a normative basis or source, whether the challenged conduct of the host State is 'fair' or 'equitable' under the particular circumstances.

MFN clauses come with a potential risk, which is their misinterpretation and this problem has come to light after the Maffezini Case where the MFN clause was used for the first time to import dispute settlement clauses from other BITs. A teleological interpretation of this type risks allowing the goal of market equalization to override the operation of the MFN clause itself. That is, it encourages tribunals to lay aside technical arguments as to the operation of the clause and interpret it in the way that will most effectively eliminate market discrimination.

The rules of customary international law on the treatment of aliens are not fully clear. In certain cases, it may be difficult to accurately determine whether a certain obligation exists as a matter of international custom. Interpretative difficulties may arise in respect of 'continuous breaches' and 'composite acts' that are protracted in time. The effect of the consolidation provision is limited as it applies to claims based on the same underlying treaty. Consolidating related claims based on different IIAs is difficult because different treaties may contain differing substantive obligations as well as diverging time limits, procedural obligations, and dispute settlement rules. …………..