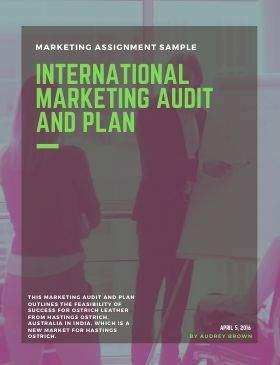 You can download the sample Marketing essay on International Marketing Audit and Plan making with the following question for free at the end of this page. For further assistance in Marketing Assignment help, please check our offerings in Marketing assignment solutions. Our subject-matter experts provide online assignment help to Marketing students from across the world and deliver plagiarism free solution with a free Turnitin report with every solution.

Your Marketing Audit and Plan will need to refer to the socio-cultural and economic factors impacting your selected country and develop clear links between these factors and marketing activities. For example, with relation to the socio-cultural aspects, you should provide more than just a collection of interesting facts. Rather, the cultural analysis should try and interpret the meaning of the cultural information, i.e.: how does the information help in understanding the effect on the market. The fact that the majority of Japanese considers themselves either Shinto or Buddhist (or both) is interesting, but more important is the effect that these belief systems have on market behaviour and the acceptance of your product.

For the impact of the chosen country‟s economy, you will need to address the following:

This marketing audit and plan outlines the feasibility of success for Ostrich Leather from Hastings Ostrich, Australia in India, which is a new market for Hastings Ostrich. Ostriches are reared on a large farm in Hastings Farms, Winchelsea, Australia. Approximately 3000 ostriches are reared in Hastings farms and they produce and sell eggs, leather, meat, and many other products. They export these to many countries, but have limited export to India. This audit analyses the gap in the Indian market and suggests how it can be leveraged for selling ostrich fine leather in India. It would be positioned as exotic and the leather will be used for producing various items targeted at the affluent, who have high disposable income, are experimentative and tends to shop often. It would be a niche product available at select locations in select cities. In the initial years, our focus would be on selling B2B; in later years, we could also move into the B2C space. The audit also analyses the potential threat to the proposed product. It also presents sales and profit projections and also analyses other important aspects such as law compliance, freight partners, distributor and individual agents for sales, etc…

India lies in the northern portion of the Indo-Australian plate, known as the Indian Plate. It is located north of equator between 8°4′ and 37°6′ north (latitude) and between 68°7′ and 97°25′ east (longitude). It has a total area of approx. 1.22 million square miles, which makes it the seventh largest country in the world. India has a land frontier of 9,445 miles and 4,671 miles of coastline. It thus has a number of strategically located sea-ports which can be used as an entry point for the imported leather. According to the Köppen climate classification, India's climatic subtypes range from arid desert (west) to alpine tundra and glaciers (north), and humid tropical regions supporting rainforests (southwest and the island regions). It also has four seasons: winter (January–February), summer (March–May), monsoon (June–September) and post-monsoon period (October–December) (Climate of India, 2011). This variation in climates and seasons make it ideal to use the finest leather for items with a year round usage.

India is the world's largest democracy. It is a federal republic and most of the executive power lies with the central government – prime minister and his cabinet of ministers. Crowning of a pragmatic leader, Mr. Narendra Modi as the Prime Minister has seen quite a lot of steps taken in the international arena with respect to international trade and cooperation. India has been pushing for India-Australia Comprehensive Economic Cooperation agreement for quite some time and is expected to be finalised by the year 2015. (International Trade, Department of Commerce, n.d.). Moreover, during the recent visit of Mr. Narendra Modi to Australia, there was a very keen positive response from the Australian Prime Minister, Mr. Tony Abbott, on signing a free trade deal with India, which will positively impact trade between the two countries, hence will increase the import of food products and farm produce from Australia, besides other goods & services, which is a positive sign for the import business. (Modi and Abbott target free trade pact, sign 5 deals, 2014) (McHugh, 2014)…

As per UN Data (2012), the population of India is estimated to be 1.23 billion, making it the world's second most populous country after China (1.37 billion). With a high birth rate of 21 births/1000 population, and declining death rate of 8/1000 population, the population of India is growing at a healthy rate of 1.2% annually and is touted to surpass the Chinese population by 2025. Also, 66% of the Indian population are in the age group of 15-64 (age group which could be potentially active economically) (World Bank Data, 2012). The median age of 27 (Agency, n.d.), makes India one of the youngest nation of the world. This young population is more experimentative and takes high risk than all previous generations.

India has been opening its economy slowly post 1991, but still it is called more of 'protectionist economy.' However, with the advent of Mr. Modi, there have been some interesting developments. With a focus on economic growth, his government is taking steps to make India investor friendly and trade friendly. With the increased talks on free trade deal and push for India-Australia Comprehensive Economic Cooperation agreement, the outlook of future trade between the two countries is favourable…

The product, Ostrich fine leather is much better than bovine leather in a number of ways as discussed later. As previously mentioned, due to lifestyle changes and increasing incomes, people are moving towards premium and more elegant items. Ostrich leather, owing to its greater value proposition (premium feel and unique texture) to the Indian consumers would thus be a success. Moreover, this is the right time to enter the market to capture the ever increasing status conscious Indian consumers, as trade outlook with Australia has never been better.

1. Relative Advantage:
Ostrich leather is very much different from that of any other animal in terms of both look and feel. The leather consists of crowns, a unique goose bump texture (from quill and feather pulled out from sockets) that makes this skin very rare and exotic in nature. It is a thick as bovine leather, but much lighter. It is more soft and supple than cow leather, but has a very high tactile strength and is considered one of the strongest natural leathers available (OstrichMarket, n.d.)…

B. Major Problems and Resistances to Product acceptance

The major resistance to product acceptance can be the fact that the potential consumers are unaware of the product benefits. Consumers are sceptical in purchasing any product which is alien to the market. In such a scenario, educating the consumers is the only option and similar exercises (promotional and otherwise) needs to be conducted here.

Another factor that might deter potential consumers can be the high price. The import costs as well as the more complex crafting process, both will drive up the costs. However, for high net worth consumers, this might be a very small issue…

Our end objective is to popularise Ostrich leather based items among Indian consumers who are affluent, well-educated and conscious of social status and loves to shop out quite often. They are experimentative and love to try out new and relatively unknown items/materials. They live in the metro cities such as Bangalore, Hyderabad, Chennai, Pune, Kolkata, Delhi and Mumbai. Hence our target market will be the various brands in India such as Bata, Khadims, Shreeleathers, etc., which manufactures leather based items.

We expect a low volume of sales in 2015 (considering 2015 as the first year of operations), as it is a very niche, novel and high priced product in the Indian market. Though, we would be operating on a high margin, but significant cost would be incurred in market development – making people (high end shopping chains, exclusive style stores, etc., as discussed earlier) aware of the superior value proposition of Ostrich leather and positioning it as an exotic or premium item. The cost would be incurred in brand development as well. So in 2015, most likely, our profits would be less…

One carton contains around 1500 leathers…