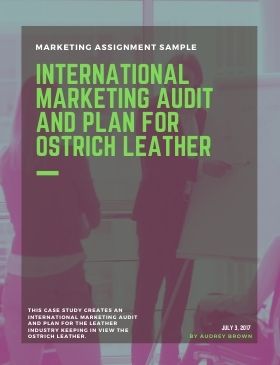 You can download the sample Marketing essay on International Marketing Audit and Plan for Ostrich Leather with the following question for free at the end of this page. For further assistance in Marketing Assignment help, please check our offerings in Marketing assignment solutions. Our subject-matter experts provide online assignment help to Marketing students from across the world and deliver plagiarism free solution with free Turnitin report with every solution.

Create an International Marketing Audit and Plan for the leather industry keeping in view the Ostrich leather.

India lies in the northern portion of the Indo-Australian plate, known as the Indian Plate. It is located north of the equator between 8°4′ and 37°6′ north (latitude) and between 68°7′ and 97°25′ east (longitude). It has a total area of approx. 1.22 million square miles, which makes it the seventh largest country in the world. India has a land frontier of 9,445 miles and 4,671 miles of coastline. It thus has a number of strategically located sea-ports which can be used as an entry point for the imported leather.

According to the Köppen climate classification, India's climatic subtypes range from the arid desert (west) to alpine tundra and glaciers (north), and humid tropical regions supporting rain forests (southwest and the island regions). It also has four seasons: winter (January–February), summer (March–May), monsoon (June–September) and a post-monsoon period (October–December) (Climate of India, 2011). This variation in climates and seasons make it ideal to use the fine leather for items with a year round usage.

India is the world's largest democracy. It is a federal republic and most of the executive power lies with the central government – prime minister and his cabinet of ministers. Crowning of a pragmatic leader, Mr. Narendra Modi as the Prime Minister has seen quite a lot of steps taken in the international arena with respect to international trade and cooperation. India has been pushing for India-Australia Comprehensive Economic Cooperation agreement for quite some time and is expected to be finalized by the year 2015. (International Trade, Department of Commerce, n.d.)[A2] . Moreover, during the recent visit of Mr. Narendra Modi to Australia, there was a very keen positive response from the Australian Prime Minister, Mr. Tony Abbott, on signing a free trade deal with India, which will positively impact trade between the two countries, hence will increase the import of food products and farm produce from Australia, besides other goods & services, which is a positive sign for the import business. (Modi and Abbott target free trade pact, sign 5 deals, 2014) (McHugh, 2014)

Changes in the Living Conditions and Individual Perception

Living conditions, in India, are not considered good by international standards. According to UN-HABITAT, India is home to approximately 63% of all the slum dwellers in South Asia. But the scenario is changing due to rapid penetration of urbanization trend driven by increasing companies' base in the country. Urbanization is taking place at a very fast pace in India – it was approximately 28% in 2001, and currently stands at 31.16%.[A3]  Given the quantum of the Indian population, this rate can be considered quite good as this means more options in potential markets for Ostrich leather.

With the influx of newer brands in India, with their high-end products, the Indian population these days are exposed to a greater variety of previously unseen goods, from high-end automobiles to exotic food items. A large population well distributed geographically and demographically means such completely new products find ready buyers and gradually increasing markets. This exposure also ensures that the reluctance in accepting relatively unknown goods and materials, for the population, is gradually changing and newer segments, with their disposition towards luxurious items, are opening up to consume these items. This provides an ideal setting for the introduction of Ostrich fine leather as a premium item.

As per UN Data (2012), the population of India is estimated to be 1.23 billion, making it the world's second most populous country after China (1.37 billion). With a high birth rate of 21 births/1000 population and declining death rate of 8/1000 population, the population of India is growing at a healthy rate of 1.2% annually and is touted to surpass Chinese population by 2025. Also, 66% of the Indian population is in the age group of 15-64 (age group which could be potentially active economically) (World Bank Data, 2012). The median age of 27 (Agency, n.d.), makes India one of the youngest nation in the world. This young population is more experimentative and takes the high risk than all previous generations.

India has been opening its economy slowly post 1991, but still, it is called more of 'protectionist economy.' However, with the advent of Mr. Modi, there have been some interesting developments. With a focus on economic growth, his government is taking steps to make India investor friendly and trade friendly. With the increased talks on a free trade deal and push for India-Australia Comprehensive Economic Cooperation agreement, the outlook of future trade between the two countries is favorable.

The Indian luxury market is growing at a CAGR of 18% and is likely to reach USD 14 billion by 2016 (KPMG, 2014). The growth in this sector is mainly driven by luxury products such as apparels and high-end accessories, among others. Irrespective of the costs involved, consumers in India refused to compromise on, what is known as the 'luxe' life.

The Leather industry in India is mainly and export oriented one, with its largest clients being the US and European countries. India is considered as the fifth largest leather exporter globally (Council for Leather Exports, 2012). It consists of different segments such as tanning, footwear, garments, accessories, etc. The leather manufacturing and production hubs of India are concentrated around Calcutta, Kanpur, Bangalore, Delhi and many other cities (GFE Consulting, 2009). The leathers of cows, buffaloes, goats and sheep serve as the raw material of choice to this industry at present. Exotic leathers of Crocodiles and Ostriches are yet to make a foray in India, although various goods and items made from these leathers are already making a presence in a few markets in India.