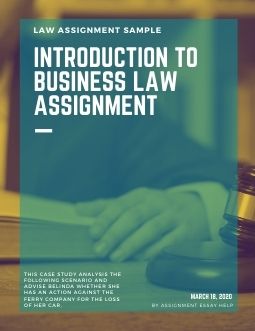 Angel places the following advertisement in the Trading Post newspaper:

Tran telephones Angel and says he will buy the car and promises to come to Angel’s home with a bank cheque within the hour.
When Tran arrives with the bank cheque to pick up the car, Angel says she has changed her mind and realised that the price was too low. Tran believes he has a contract with Angel.
Advise Tran whether he has an enforceable contract with Angel, outlining the elements necessary to form a valid simple contract.

Critically analysis the following scenario and advise Belinda whether she has an action against the ferry company for the loss of her car.

Belinda, who resides in Melbourne, decided to take her family to Hobart. Arriving at the ferry (which she has often used before), she is given a ticket on paying her fare and the fare of her three children. On the reverse side is written:

“All vehicles and passengers use this ferry at their own risk”

She does not read these words nor does she see the notice on the ferry itself that has identical wording. Due to negligent navigation by its captain, the ferry collides with an underwater obstruction marked by a warning buoy. The ferry sinks slowly enough for all the passengers and crew to be rescued but the ferry and vehicles on it are lost.

Question
Obtain a copy of a written contract that is available in Australia from the net or another source. For example you could download one of the many online contracts you are asked to agree to before accessing a site or entering an online contract.

Please provide the following information:
1. Select a term in the contract that is written in complicated legal language. Highlight at least three words or phrases that you don’t understand, research their meaning and provide a definition for each one. Please include an example if you think that will help.
2. Proved a plain English ‘translation’ of the term you chose in (i) above or another term. The words you use should be clear to most English speaking adults. Feel free to make significant changes to the structure or wording and to use everyday language.
3. Print out and highlight six terms. You then must classify each term as either a condition or warranty using case law. You must include a brief explanation about why you think each one can be classified in this way.

The general rule as enshrined in Thornton v. Shoe Lane Parking [1971] 1 All ER 686) is that the term must be brought to the attention of the contracting party before or at the time the contract was made.

As reaffirmed in Oceanic Sun Life Shipping Company Inc. V.  Fay (1988) 165 CLR 197 in order for the terms to form a part of the contract, they must be made available before the contract is made.

In the present case, there is nowhere suggested that such terms were orally, expressly or through signboards before the purchase of tickets was make known to Belinda. Therefore as the term was not brought to her attention it cannot be said that they had accepted the term. Thus the term will not be part of the agreement between the parties………………..