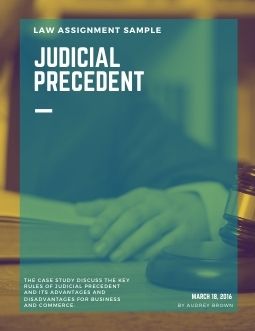 Discuss the key rules of judicial precedent and its advantages and disadvantages for business and commerce.

In Australia, the case of Farah Constructions v Say-Dee [2007] HCA 22 was an important one, since when the Justices ensured that the power of lower courts to develop law was regulated and controlled. The Farah v Say-Dee case had the High Court reversing the judgment of the Court of Appeal. The point of contention that came along here was significant – if the High Court considers certain facts that were not really necessary for reaching the outcome of the case, but in its judgment, writes down the rationale and it exists, then other Australian courts are bound by it accordingly. This was the guidelines mentioned (in Bofinger v Kingsway Group Ltd [2009] HCA 44, [86]) as well.

The Farah case brings into statement that Courts need to consider 'seriously considered dicta' as well, or rationale that is not necessary for the outcome of the present case. There have been doubts, of course, of the effectiveness of this and Justice Kirby had stated his apprehensions in R v Keenan [2009] HCA 1, where he stated his concern as to how much lower courts will be bound by something that's not in the true sense, ratio decidendi of the case…

Some of the key principles governing the judicial precedent are below:

The legal reasoning applied to by an earlier court of the higher authority has to be respected and followed.

3. Bound by own decision

Normally, even the appellate court is bound by its own decision in a previous case. However, this is not a must and is of a persuasive value. If need be, the appellate court can apply legal reasoning in a different way, should it feel the need to do so…

Advantages and Disadvantages for Business and Commerce

Business and commerce, of any country, needs to be certain about processes and the results of particular actions. While laws and rules relating to business are often an indicator of how the businesses are trying to shape up their economic activities in the country, there are certain advantages and disadvantages that the doctrine of precedent bestows upon businesses and Commerce. Here is a look at some of them.

1. Certainty – With certainty, businesses know what to expect from certain actions. Previous judgments on a similar competitor would enable businesses to be clear about the law as well as help them take the proper legal recourse should they feel their legal rights have been infringed.

2. Consistency – The business world is itself unpredictable and any business would be looking forward to consistency and fairness, something that the doctrine of judicial precedent brings to the table by its virtue. Businesses can know that their legal case would be dealt with in the same way as any other and there would be no prejudice or different legal reasoning applied…

Judicial precedent presents a way for businesses to be surer of court decisions and understand the different legal nuances. It helps the courts to dispose of cases easily and not worry about spending money on court expenditure unnecessarily. Except from renewing faith in the Judicial system, it also helps Australian businesses to be more sure of the law of the land.