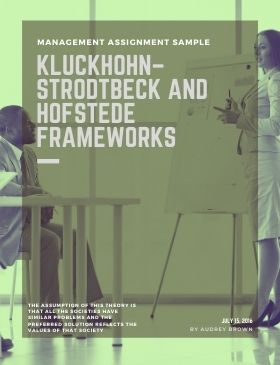 To what extent can the Kluckhohn Strodtbeck and Hofstede frameworks be used to analyze cultures and therefore provide the international business manager with a worthwhile tool of analysis?

Nowadays business is getting competitive and thus it has to be driven by globalization. This trend of globalization means companies are going international and thus there is a need to understand international business in terms of country, culture, language, religion, custom and mindsets of society. Different countries have different cultures. The differences in the culture are mainly influenced by values, attitudes, social structures, religion, and language. Companies without understanding the cultural dynamics can sometimes lead to workforce conflict, poor negotiation, unfit leadership styles, wrong strategy formation and implementation, and so on (Fullan, M. ,2014). In order to overcome all these issues it is very important that the international manager of the company classifies cultures based on differences in influencing factors such as values, attitudes, social structures, religion, and the language (Wild & Wild, 2013)…

Florence Kluckhohn and Fred Strodtbeck developed Kluckhohn & Strodtbeck's framework, which is also known as a Comparative anthropology framework, in 1961. This work by Kluckhohn & Strodtbeck has influenced the conceptualization of cultural variation management. This is based on the values of society. The assumption of this theory is that all the societies have similar problems and the preferred solution reflects the values of that society (Hills, 2002). This framework consists of six value orientations to compare different cultures (Wild & Wild, 2013). They are as follows:

The society that believes to work together with nature to maintain harmony and balance are harmonically oriented. (Wild & Wild, 2013) explains that Japanese culture has a belief that a delicate balance between people and the environment must be maintained. The reaction of the Japanese in the scenario of an accident due to an undetectable flaw in the company suggests a harmonious orientation in Japanese culture. Japanese culture believes in living in a balanced natural force. Society that thinks of exercising total control over nature is about Mastery orientation and the opposite is submissively oriented.

With reference to the example given by Wild & Wild (2013) Japanese give a lot of importance to trust factor. This suggests that they belong to good/immutable orientation. They always do well and try to remain good in the future as well.

Wild & Wild (2013) suggest that Japanese people work for the people, group, or company they are working for. Japanese managers make decisions on collateral orientation giving equal emphasis to the consensus within the unit of equals. They treat every employee as equal to others. They take collective approach of decision-making wherein every employee can have his or her 'say'. The society having concern only about him/her and immediate family is individualistic oriented. The society that follows the hierarchical system is hierarchy oriented.

Wild & Wild (2013) suggest that Japanese culture believes in mutual benefit culture. The individual should look for the group and the group should also look for the individual. It is a culture of working for each other. They are accomplishment oriented. For example; Subordinates in a company, make sure that the target of the manager is achieved and in return manager makes sure that subordinates have job security and satisfaction. Japanese society strives for goals, whereas other societies may live for the moment or can be reflection oriented (Hills, 2002)…

Hofstede framework is the second theory developed on cultural variation. It was developed by Geert Hofstede (1980), studying 110,000 people working at IBM in 40 countries (Wild & Wild, 2013).He organized cultural variations among nations in several key dimensions. He found a wide variety of business and consumer behavior patterns that could be explained in particular are by five dimensions (Hofstede, G, 1980):

It measures the preference of behavior that promotes one's self interest – the 'I' over the 'we'. In individualism bond between individuals are not so close and everyone is independent to look after themselves and their immediate families. In collectivism it shows strong, cohesive group membership from birth, strong expectations and loyalties. Since individualist cultures focus only on self they have high risk taking ability and thus leads to entrepreneurial activities, innovation and invention. On the contrast collectivism believes in building long-term relationships and trust. For example: Japanese business conducts slowly, building long-term relationships and trust. American businesses are deadline oriented, not time wasting with social interactions. Japanese culture relies on maintaining harmony and conflict. If American business comes into conflict the American approach of signing the deal is to show anger or frustration and to lose face. It is not an issue with American culture (Cai, Wilson & Drake, 2000).

It measures the inequalities between the top and bottom level employees in a company or organization. The greatest score at this dimension means societies are hierarchical societies. They have a high tolerance on social inequalities. They have a motive of manipulation and inheritance a source of power. On the other hand, a system with a lower score looks for equal status among all and share knowledge and courtesy as their characteristics. For these societies 'What you know' is important, not 'Who you know' (Hofstede, G. 1998).

It expresses who much one is tolerant of uncertainty and doubtfulness. A greater UAI rank suggests a society that is risk adverse and thus has no aptitude for innovation and invention. They follow the traditional ways of doing things. They believe in truth. On the other hand societies with low uncertainty score have innovative culture. They want to take risks and embrace change…

This model of cultural variations has faced lots of criticism by other researchers in the same area. The key concerns with Hofstede Model relates to its relevance, cultural homogeneity, national divisions, one company approach, outdated, limited dimensions and statistical integrity (Kool, C., & Muysken, J. 2013).

Both of the frameworks of cultural analysis have limitations. The Kluckhohn & Strodtbeck's framework doesn't have any measures for the orientations that results from the proposed six questions. It deals with values rather than attitudes that makes the analysis more general rather than specific. In the same way Hofstede Model has a list of flaws in the way the survey was performed and data were collected, development of theory on the assumption that there is a homogeneous culture (but nations are composed of many ethnic groups), national divisions (are 'nations' the proper units of analysis), the study is based on only one company's employees, the study is too old, the dimensions are limited to cover all the cultural aspects, and lack of statistical integrity (McSweeney, B., 2002). These all limitations and criticism suggest both these tools are not worthwhile for cultural analysis to the maximum extent. These tools can be good for initial analysis, but detailed analysis is hardly performed. Depending on the requirements of the international manager other options like Shwartz' value survey (1990, 1992), Trompenaar's dimensions (1993), Social axioms, and the GLOBE study (Leung, Au, Tong, & Chemonges-Nielson, 2004) can be considered by the international manager.