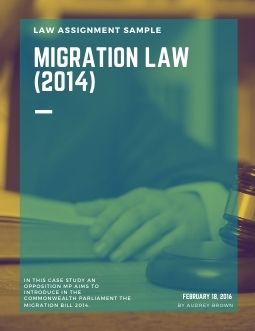 An Opposition MP aims to introduce in the Commonwealth Parliament the Migration Bill 2014.  S 180 of the Bill provides that an officer must detain a person if he or she knows or reasonably suspects that the person is an unlawful non-citizen in or outside the migration zone.

Under s 181 of the Bill, an officer must remove an unlawful non-citizen 'as soon as reasonably practicable' if the person is not immigration-cleared. Otherwise, detention is to continue until the Refugee Review Commission (RRC) determines that detention is unlawful. The procedure provides that, within 3 weeks upon application by the detained person, the RRC 'determines' the lawfulness of the detention. The RRC's determination is subsequently conveyed to the Registry of the Federal Court within 2 weeks of the 'determination' being made. Initially, s 180 provided that a determination by the RRC would not become enforceable without the institution of separate proceedings before the Federal Court. However, in the drafting process this mechanism was revised, so that, finally, RRC's determinations become effective after transmission to the Registry of the Federal Court, in the absence of an application for review by any interested party within 2 weeks from the time of transmission.

Advise the MP on the legality, in particular, the constitutionality, of the Migration Bill 2014.

The question concerns mainly topic 2 (Constitutional Concepts). Of course, you can establish sensible connections with other topics. Remember that it is crucial to provide simple and logical answers.

At the outset, it should be remembered that the British Constitution is unwritten. However, that doesn't mean that there aren't sound principles of law governing the same. Down the years the Queens court and the House of Lords have laid plenty of judgments that have made concepts clearer.

Illegal immigration has been a problem in Britain for quite some time now. The heavy influx of illegal immigrants poses a threat to the security of the country as well as the welfare of the people. It should be remembered that both U.S and U.K are the two most popular countries when it comes to immigrants and in 2006, nearly 343,200 people migrated to the UK. However, this is the case of legal immigrants. The number increased to 725,000 in the UK by 2009

The problem here is with illegal immigrants, which come in huge numbers to the UK and the UK government has struggled through the years to control this influx. What's more disturbing is the fact that there are illegal immigration rackets are being run in the country.

The question of immigration and constitutionality

Among the first cases that related immigration with the constitution was the case of Murray V Parkes which discussed the concepts of citizenship, nationality and domicile. While illegal immigrants may not themselves be allowed to practice and carry out work in the country legally, their children cannot be denied the right to education. This was what was held out in the United States case of Plyler v. Doe.

There are a number of concerns that need to be addressed, in this given scenario. Here are some of the problems that can crop up.1.      Following due process of law

The main problem with the Migration Bill 2014 rests with Section 180 of the Bill. It is stated that  the officer has to remove the unlawful citizen 'as soon as possible'. It's stated that the person needs to apply to the Refugee Review Commission (RRC) for it to be verified if his detention has been illegal. Otherwise, the officer can remove him. On the other hand, the RRC can decide on its own within three weeks and reach its own determination, which it will only notify to the Government and not carry out a separate Federal suit as was required before. What this essentially means is that the victim will not have the right to be heard at either of the stages. The victim thus does not have any chance for him to be heard in front of the proper authority. The principles of natural justice requires that the person should be heard properly which seems to be missing and the remedy for that is not available…….