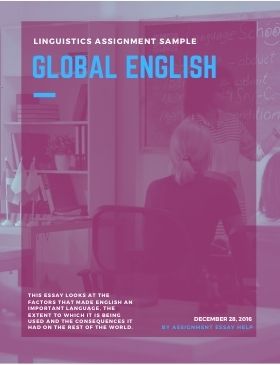 This essay looks at the factors that made English an important language, the extent to which it is being used and the consequences it had on the rest of the world. We will look at views of various researchers who offer new perspectives on the issue of the linguistic domination of English, the factors that led to countries that were not former colonies adopting English, the issue of a standardized English enabling international communication among all countries and also the existence of various 'Englishes'.

One among four people in the world uses the English language. Its vocabulary is constantly expanding to accommodate the lexical needs of a varied population in diverse countries.  English domination was consolidated when the United States emerged as a technological and military super-power, after the Second World War. At least 1.5 billion of the population throughout the world speak English (David Crystal, 2000, p6)[1]. From a struggling vernacular in the 14th century, when it had to be developed and taught to natives of England who spoke dialects for the most part, it has become a megalith among the languages.

The Spread of English

Colonisation, industrial developments, scientific, technological and medical developments that took place in England, and later, in the US, played a huge part in establishing English as a progressive language that had to be learnt if one was to progress. It is acknowledged that the present century will be dominated by the Internet connectivity and according to most users of the language, English. (Paroo Nihalani, 'Globalisation and International Intelligibility', 2010, p23).  The spread of English started with the growth of English nationalism and imperial supremacy. An important factor that led to English domination was that the Industrial Revolution took place in England and Europe. All scientific discourse during that time as well as later, when the US emerged as a technological power, was in English. The languages of the rest of the world, barring a few, were not able to keep up with the pace and volume of progress.

Another important factor was that English continued to be used for all governmental and educational purposes, even after independence, in the colonial states. Institution of Man Booker, or Booker prizes and other awards for books written in English, by Britain continues to provide an incentive to keep English alive in these countries.  However, in the decolonised states, the continuation of English usage has divided the population into two classes of people: the educated rich occupying key positions of power and the poorer section of the people, disadvantaged by their lack of English knowledge and holding lesser jobs. Significantly, in south Asia, among the ASEAN*[2] countries, some of which had not been colonised by the British, English has been the official language of communication. (Kirkpatrick Andy, 2010).

In the Philippines, during the US occupation, the imposition of English was associated with the adoption of foreign theories and ideas that had nothing to do with the local culture. Further, the legacy of English has created a deep divide between those who had access to learning English and were among the affluent sections of society and the poor who had no means of English education.  As Phillipson states, 'One of the most durable legacies of colonialism has been language. Yet, only about 3 to 4% of the population in the former colonies of Asia and Africa know English. In the context of globalisation, language provides careers and economic prosperity. Organisations like the IMF, trade policies and foreign aid also promote the use of English adding a new dimension to colonial domination – neo-colonialism.

Related to the hegemony of the English language, is the phenomenon of 'neo-colonialism', which is best exemplified by the Saudi Arabian linguistic history.  English was first introduced to help the employees of oil and gas companies to communicate with the Americans whose expertise was necessary for the companies. Over the years, as a broad-based curriculum was introduced, when English was introduced in primary schools, many feared that it will lead to the loss of Islamic culture and values. This led to protests by some against the charge of 'westernisation' of the country, while others rooted for the youth of the nation to develop creative and critical abilities. The latter found justification for tolerance and acceptance of other languages and cultures in the Koran. Moreover, the neighboring countries of UAE, Qatar etc. readily accepted the ELT methodologies of learning and teaching English.

In the context of retaining the linguistic hegemony that bestows enormous benefits to the Western powers of US and UK, we shall take a look at how the two countries have promoted the ELT and ELF. 'Benevolence' substituted for 'civilizing mission' in the era of neo-colonialism. US entities like the Carnegie Endowment, The Ford Foundation and  the Rockefeller Foundation, in addition to the US government, funded cultural exchanges and health and educational programmes with a view to advance their foreign policies, culture and language.

Teaching and offering educational scholarships in US Universities, funding English training programs for teachers and students all over the world, engaging volunteers to travel abroad for English teaching are some of the ways in which English knowledge was disseminated. Dependency on a foreign language as well as having a wide exposure to it entails absorbing its literature, values, and ways of thinking.

In the UK, promotion of British culture and language was done through the British Council that became important in the teaching of English in Third World countries.  The British government saw a way to project its image abroad while furthering its economic and political goals. The competition of  indigenous languages, communist literature and aggressive American policies of teaching English abroad made the British join forces with the US to introduce ELT training and research to fuel the growth of English speaking population throughout the world. Additionally, the British Broadcasting Corporation, British books and publishers were spread out far wide to promote English as the only common language in the world.

Such instances lend credence to Phillipson's views on 'linguistic imperialism' (Phillipson R, 1994)*[3]   He implies that popularising English was a deliberate and concerted attempt by the US and the UK to consolidate economic and political domination over the rest of the world with the help of language policies. Referring to Saudi Arabia again, in this context, it is seen that with increasing dependence of Saudi Arabia on the US, the teaching of English along with Western cultural incursions has increased over the years.

The general feeling among people who learn English as a second or foreign language is that, wide-spread dissemination of English has led to the neglect of local languages. The loss of knowledge of the indigenous languages is accompanied by a much greater loss of a culture and valuable traditional knowledge in all fields including art. In the former colonies, the propagation of English has led to serious psychological issues relating to the loss of identity of whole communities of people. It is also a fact that learning an alien language that has no connection to one's culture is a waste of valuable resources of time, energy and money. Most importantly, the full potential of a person is realised only when he/she is able to think and feel in his native language because it is closely connected to his cultural past.

A positive view in this context is that, the anxiety of losing one's language, culture or identity can initiate determined efforts to prevent the loss and lead to a revival of cultures that are presumed to be at risk. (Paul Bruthiaux, 2008, Chapter 1, p.25-26)

Related to this issue, it must be mentioned that language policies of states make a vital contribution to language education. Many issues complicate the framing of language policies. In spite of pressures to make English education compulsory, a few countries are trying to introduce multi- or bi- lingual education system that can help children to understand abstract concepts and make them interested in learning. It can help reduce the drop-out rates in primary schools as well. However, all over the world, the importance of English in all domains is an acknowledged fact.

For instance, English had an important role in building the nation in Singapore. The country has four official languages, so that no particular community is neglected. Yet, English has proved to be the most popular choice for education*[4]– and also as the home-language. The influence of inter-cultural marriages may be one reason for this phenomenon. In Karnataka,

[2] ASEAN (Association of South East Asian Nations) was founded in 1967 and initially consisted of five countries.