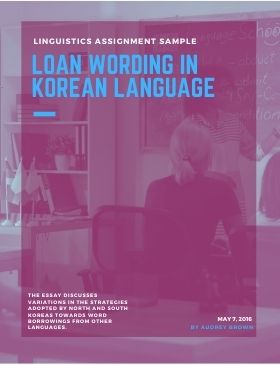 You can download the sample Linguistics case study on Loan Wording in Korean Language with the following question for free at the end of this page. For further assistance in Linguistics Assignment help, please check our offerings in Linguistics assignment solutions. Our subject-matter experts provide online assignment help to Linguistics students from across the world and deliver plagiarism free solution with free Turnitin report with every solution.

What are the different strategies towards loanwords? How good is the impact of Korean language on the two countries South Korea and North Korea?

The essay discusses variations in the strategies adopted by North and South Koreas towards word borrowings from other languages.  Although Korea was a single country before World War II, after the split in two sovereign states, their concepts of culture, art and language underwent some changes.  Korean language contains numerous borrowings from Chinese, Japanese, English and other languages which have increased and enriched its vocabulary.  Dialects spoken in different parts of the country contribute to the size and complexity of the language. One reason for the presence of foreign words in the language is the fact that Korea had been invaded and ruled by the neighbouring countries of China and Japan in the past for a long time. Notwithstanding the split and the ideological differences among themselves, the two countries have come forward to eradicate the foreign words, revive the indigenous language, and maintain a standard language that would be comprehensible to all Koreans. The essay discusses the sources and extent of loanwords, the difference in ideologies and its influence on the methods adopted for 'purifying' the language, and the way in which modern elements are being adapted in the language…

The historical background of Korea:

It is imperative to examine the Korean history in order to understand the difference in approaches of the two countries towards foreign loanwords. Korea was ruled by the Choson dynasty for a long time. Under the Choson dynasty, hancha (Chinese characters) dominated the script, though hanguel was already in use because the government followed the principles of Neo-Confucianism. During the Japanese invasion that lasted from 1910 to 1945, the Japanese used totalitarian methods like 'thought conversion' to suppress and subdue the colonised. They applied the method to Korea, until the end of the war…

Role of ideology and politics in the strategy towards loanwords:

Neo-Confucianism played a role in the intake of Chinese characters and words under the Choson dynasty. After the Revolution, there was a conflict of ideologies between the two new countries. Both the countries basically agreed to purify the Korean language of foreign elements, but, the political strategies followed by North Korea influenced its language policies. North Korea was a rigid, socialist country and followed communism.  Kim, Chin-Wu discusses the general trends of the party ideology as being Socialization, Nativization and Prescriptivism.

The methods followed by North and South Korea for language purification:

In South Korea, it was carried out with the help of articles in newspapers and magazines, deliberations on the subject of making foreign loanwords into Korean words and other means (p121). Government agencies and organisations, educational academies and institutes were also part of the purification process, which included eradicating foreign words that were considered indecent.

Words of Chinese origin, called Sino-Korean (SK) comprise close to half of Korean vocabulary and are written in the Hanca script. It is used along with the Hangeul script of Native Korean. As it was possible to replace Hancha with Hangeul, in South Korea, writing in Hanhca was banned for some time in government publications, and also in schools. Later, a figure of 1800 characters was allowed to be taught. Now, however, there is a demand for learning Hancha.  The vacillating approach is common to both the countries, and they had different reasons for it.

Adaptation of loanwords in the present times:

The method of borrowing voiceless plosives /p, t, k/ in English is as follows: they are aspirated- /ph, th, kh/, and wherever they are placed in a word, are context-free. The consonants /b, d, g/ in English are typically voiceless lenis  plosives /p, t, k/ in Korean. For example, the words bag, dam, and gas are adapted in Korean as paek, taem, and ka.s'. The Koreans never insert vowels to simplify the adaptation phonologically, but use other ways to overcome the difficulty.