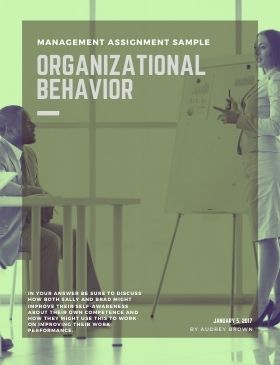 You can download the sample Management essay on The Company  iTwin with the following question for free at the end of this page. For further assistance with Management Assignment help, please check our offerings in Management assignment solutions. Our subject-matter experts provide online assignment help to Management students from across the world and deliver plagiarism free solution with a free Turnitin report with every solution.

Undertake a Literature Review (max 1500 words) on 'the Dimensions and Antecedents of Organisational Citizenship Behaviour (OCB)'. The review is to focus solely on refereed academic publications (i.e. journal articles).
As students of Organizational Behavior it is important that you are able to effectively identify, collate and disseminate credible information on a range of issues that have strong theoretical and/or practical relevance to the field. Such information will often provide the basis for effective planning and decision-making.

There has been a rapid changes in the functioning and positioning of productions and services to the customers. In bringing those changes Human Resource of any organization has made key contribution. With the increasing importance of human resource in the recent times Organizational Citizenship Behavior (OCB) has been widely studied and more sought after research topic in organizational behavior. This topic has not only been researched on organizational behavior ground but it has also been researched in social psychological ground. It has been studied since mid 1960s. Katz (1964); Organ (1988,1990); Graham (1991); Podsakoff (2000) are some of the researchers who have hugely contributed to the theory of Organizational Citizenship Behavior. OCB is a moderately new idea in performance analysis, however it speaks to an exceptionally old human behavior of deliberate activity and common support with no appeal for pay or formal remunerates consequently. Dennis Organ initially presented the idea in the mid 1980s and Concept has got the force in later a long time.

Organ (1988) defined OCR as a behavior of an individual that is discretionary in nature and has no relation to the reward system of an organization but it is very instrumental in the overall effective functioning of the organization. Joireman (2006) explained OCR as a behavior, which does not fall into regular expectations.  It reflects something, which is not routine. Katz(1964) explained OCR as behavior which doesn't fit into the regular behavior but plays an extra role . Organ and Bateman (1983) on the work of Katz(1964) further explained that OCR is a by-product of day to day relational exchanges in our social lives. Walz and Niehoff (1996) described OCB as behavior, which is due to organizational activities in the society. It has relationship with other societal activities as well.  (MacKenzie , 1991;Organ, 1988; Podsakoff and MacKenzie, 1994; Smith , 1983) suggested that OCB is not individualistic in nature but it is collective in nature. It has lot to contribute to the proper functioning of the organization and ultimately the success of the organization. In this doing this OCB contributes in many ways.

There are various transformations that happened since its inception as a concept. (Smith, 1983; Bateman & Organ, 1983) advised two dimensions of OCB; a) general compliance and b) altruism. The general compliance means employee should work as per the company guidelines and altruism means in doing so employees can help others as well but just related to their work. Various researchers later modified these dimensions. In doing so Organ (1988) came up with five dimensions of OCB.; Altruism ; civic virtue ; conscientiousness; courtesy; and sportsmanship .
•    Altruism: It is an act of caring or sympathizing toward the welfare of others. It helps other people who have been truant, or helps other people who have extremely workloads.
•    Courtesy: It takes organizations to attempt to anticipate issues with different laborers. It does not misuse the privileges of others.
•    Civic Virtue: It indicates that attending meeting or team gathering not required, yet it viewed as imperative. It stays up to date with changes in the organization.
•    Conscientiousness: It indicates that employees do not take additional breaks. It is mandatory that they obey organization's principles and regulations mostly when there is no watchdog.
•    Sportsmanship: It takes a considerable measure of time about things, which are of not that importance. It continuously concentrates on what’s wrong. It doesn’t look at the positive aspect because it aims to correct the wrong side.

In 1997, there was more modification done by Organ by classifying those dimensions into three broad dimensions namely; helping, courtesy, and conscientiousness. Williams and Anderson (1991) later came up with two types of OCB; Behavior related to the specific employees in the organization such as courtesy and altruism and other behavior which is related to the whole organization in the form of conscientiousness, sportsmanship and civic virtue. Some behavior researchers believe that job satisfaction is the only single dimension of OCB. Penner (1997); Robert(1993) claim that job satisfaction is directly related to the Organizational Citizenship Behavior and thus it has greater influence than other factors mentioned by different researchers and scientists.
Stephanie (2006) found that the employee was absolutely identified with service oriented Organisational Citizenship Behaviors, consumer loyalty, and client dedication, though full responsibility was not identified with these results. The degree to which the indicator variables connected with one alternate and the part of employment status on these connections was additionally investigated. High amounts of job satisfaction or emotional commitment brought about more service oriented Organizational Citizenship Behaviors for workers and independently employed laborers, while elevated amounts of both brought about more service oriented Organizational Citizenship Behaviors for managers.
Barrick and Mount (1991) in their research found out that private sector employees are lesser 'agreeable' than those of public sector employees. The more that 'agreeable' attitude the more the organizational citizenship behavior.  They have highlighted that ' agreeable' alone is the key factor for organizational citizenship behavior. On this concept later John and Srivastava (1999) with their addition came up with a theory which says, ' the employees who have higher agreeable are of more helping nature than those who have low agreeable'. Elanain (2007) supported this theory and concluded that there is a positive correlation between agreeableness and organizational citizenship behavior.
There are various antecedents, which came across during the initial research to the present research.  Some of the common variables that have come across during the OCB to find out the antecedents of OCB are; demographical for example altruism and courtesy are regarded as feminism and civic virtue and sportsmanship are more of masculine in nature; job satisfaction which justifies a comparison between private employee and public employee; performance appraisal and reward at work in the form of bonus or allowance or may be promotion, there has been no reward for sportsmanship; organizational and procedural justice, factors such as trust, level of treatment etc falls under organizational and procedural justice and personality , agreeableness, introvert, extrovert, and other factors related to psychological contract; emotional intelligence , conscientiousness, civic virtue ,altruism, motivation whether self or due to other factors likes rewards, appraisals etc are the factors related to personality which effects OCB. Among these job satisfaction is the most instinctive antecedents of OCB. It was found that the correlation between OCB and job satisfaction is very simple. In the context of OCB the relationship OCB and job satisfaction is weaker than the correlation between job satisfaction and performance in a role. Apart from job satisfaction they also found out that justice, responsibility of organization, and support from leader is also related to OCB. Irrespective of the types of leadership, leadership also has a prominent role connection to OCB.
•    Job satisfaction –  This varies from countries to countries. In some countries job satisfaction correlates with commitment, sense of responsibility, trust, customer's perceived quality and so on. Most of these factors come from research done on Western countries. There is a fair chance that it can be different in Asian or African countries.
•    Commitment – Irrespective of the types of commitment, depending on the work culture of different countries commitment has more or less the same sense. But there are due to the difference in work culture there may be differences in the score in organizational commitment.
•    Treatment – It can be synonyms to equality, trust, justice and so on. Fair treatment leads to effective organization functioning and thus it is an important antecedent. Different cultures have different level of sensitivity to the treatment and thus the preference of these varies from countries to countries. The culture of a country has direct impact on the importance and the meaning of equality, trust, justice or overall treatment. …..