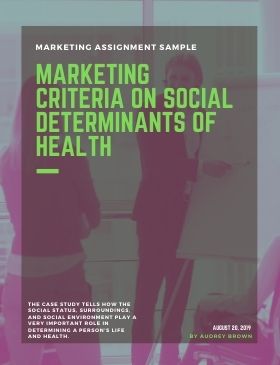 You can download the sample Marketing essay on Market Analysis report on Facebook with the following question for free at the end of this page. For further assistance in Marketing Assignment help, please check our offerings in Marketing assignment solutions. Our subject-matter experts provide online assignment help to Marketing students from across the world and deliver plagiarism free solution with free Turnitin report with every solution.

The Social Determinants of Health

The social status, surroundings, and social environment play a very important role in determining a person's life and health. The kind of environment in which an individual grows develops and work is said to be the social determinants of health. These social realities of people show the health conditions and their well-being. Several types of research over the years have supported this hypothesis that the kind of society in which a person is born into and then lives, are crucial elements to determine the health. That is why most of the rich people have better health as they get better health quality and access to health easily, as compared to the poor people (Wilkinson, R. and Marmot, M, 2003). The positive social determinant of health chosen for this project is Social Support and the negative social determinant of health is Stress (Wilkinson, R. and Marmot, M, 2003). This project shows that social determinants of health are a very important element that causes good or poor health in people. Stress and social support are two of the social determinants of health that are explained in the report of 'The Solid Facts' by WHO. They denote and predict the health of a person and demonstrate that how living in a particular social setting may change a person's life (Wilkinson, R. and Marmot, M, 2003).

Social Determinants and their Impact on Health

Stress is a negative social determinant of health as it disturbs people mentally, makes them worried and hampers psychological as well as physical well-being of a person. Stress starts as a psychological problem, by misbalancing the emotional well-being of a person that makes it difficult to cope with the pressure of their social surroundings. This is later followed by physical problems wherein a person may develop health conditions and also result in premature death (Well Spring Counseling, 2015).

As a matter of fact, stress is one of the major reasons in the world today that causes emotional distress and also one of the prime causes of depression, anxiety, and other personality disorders. The statistics also reveal that mental health is one of the highest concerns of the health policy makers, as it is a leading cause of health problems. There are various problems that may cause stress in an individual, regardless of their age, gender, culture or norms. Stress can affect any person at any time of their life, which can take place due to work pressure, problems arising in the family, relationships, the educational life of a student, peer pressure, changes in the environment, physical changes, etc. Although stress as a condition is found in every section of the society and people from all the rungs are affected by it, but the middle class and people living in urban spaces are hardest it. The changing lifestyles, notions of individuality, the breakdown of the family, building pressure in the workplace, completion and fast paced lives are the main reasons that cause stress. As a matter of fact, stress may seem as a mild problem, but it has greater effects on people's lives. This is because, if a person does not come out of stress and experiences prolonged stress and anxiety problems, he/she may further develop physical health problems as well. Diabetes, obesity, high blood pressure, depression, stroke, heart attack, aggression and premature death are all the results of untreated stress problems. Thus, stress is becoming a major problem of the industrialized nations and every person, adult or children are facing the problems of stress in their lives. Stress and illness are related to each other, and people who suffer from stress and tension often develop major health problems (Allen, R., 2014).

In my own experience, I have met with several people who have suffered several health problems due to stress, tension, and anxiety in their lives. I know a man in my neighbor, who developed type two diabetes and high blood pressure after the demise of his wife. In another incident, I met a woman was suffering from severe obesity, high blood pressure; she had suffered a heart attack once and was prone to it. The woman was also suffering from diabetes, depression and anxiety disorders. After having a conversation with her, I got to know that she was facing problems in her married life, as a child she was always teased about her weight, as obesity runs down in her family. Due to her overweight problems, the woman never went out for any physical activity because she was very shy of what others might perceive of her. Even in her workspace, she did not have many physical tasks because she was a receptionist. The woman hardly used to cook at home and mostly ordered food. In fact, she had 2 daughters who were over- weight and had a sedentary lifestyle, thus even they were prone to have similar problems like that of her mother (Australian Health minister’s advisory council, 2010).

This case demonstrated inter- twined of psychological issues and physical health issues. The woman was suffering from several physical health problems on one hand and with psychological problems on the other hand. It was hard to know what came first, but the existence of both stress and physical illnesses were easily found. As a child when she was teased had made a major impact in her life, and that is why she was still shy of other people's comments on her. The woman was also going through a bad phase in her marriage, which is why she hardly had anybody to talk about her feelings and worries that are causing depression. In a way, as a mother, she was also influencing her daughters with a low and sedentary lifestyle. Therefore, the woman required immediate intervention from a therapist and people to motivate her and explain her consequences of her illnesses (Allen, R., 2014).

Research reveals that stress is causing major problems in the industrialized societies and people are coming under it. The government should set up appropriate welfare programs to address this issue. It is also advised to have community programs, wherein people suffering from stress are constantly motivated and get awareness about their mental well- being. These programs should be able to provide a sense of belongingness, inclusion and healthier environment, so that affected people can think positive and talk about their problems with friends, family or counsellors (Wilkinson, R. and Marmot, M, 2003).