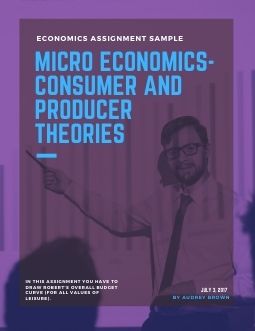 You can download the sample Economics essay on Consumer and Producer Theories with the following question for free at the end of this page. For further assistance with Economics Assignment help, please check our offerings in Economics assignment solutions. Our subject-matter experts provide online assignment help to Economics students from across the world and deliver plagiarism free solution with a free Turnitin report with every solution.

His production function is:
q = min {L0.5, K/3},
where labour is measured in hours, kiwi fruits in kg, and juice in (large) bottles. For example, if he uses 3 kg of kiwi fruits and spends 1 hour, he can produce 1 bottle of juice.
a) Derive an expression for Cheburaska's expansion path. How does it depend on the wage and the price of kiwi?
b) Draw the expansion path and isoquants for q = 1, q = 2 and q = 3 on a diagram with labour on horizontal axis and fruits on vertical.
c) Let the price of labour-hour be given by w = $20 and the price for each kg of fruit be given by p = $4. What is the optimal amount of labour and fruit to use to produce q bottles of juice, if Cheburashka strives to minimise costs? Illustrate on the graph from b) by drawing corresponding isocost lines.
d) What is Cheburashka's long-run total cost function?

Robert is currently single, unemployed and looking for a job. He has found a job that pays him a wage (r) of $15 per hour. He has a total time (T) of 24 hours a day available for work (W) and leisure (L). His income from both the mediums is taken together in the vertical axis.

a)      Robert gets a Government allowance (G) of $81 per day if he doesn't work at all. With this money, he can buy 'other goods' which have a unit price. The diagram showing the point A, where Robert enjoys 24 hours of leisure and earns $81 a day is as follows: (Fig.1)