ADS711 – Non-Government Organisations and Other Development - Skip to content 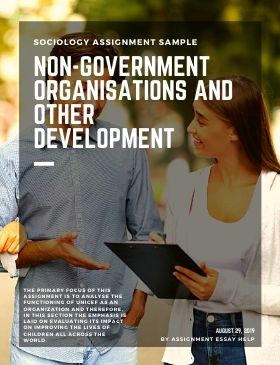 • Clear and concise response to the topic

The primary focus of this assignment is to analyse the functioning of UNICEF as an organization and therefore, in this section the emphasis is laid on evaluating its impact on improving the lives of children all across the world. It bears noting here that UNICEF began in 1946 as an instrument to provide relief to affected children from the Second World War and the problems that came with the aftermath of the Second World War (Schaaf, Supranational Governance. In Development Organizations, 2013). The famine and diseases that were rampant after the Second World War had the worst impact on the children. As a result, UNICEF was envisaged as an organization to fill the vacuum that had set in on account of the absence of any structured governance. However, with time the ambit of the functioning of UNICEF as an organization grew in significance and importance. As per Mission Statement, UNICEF was aimed to serve as an organization which is 'non-partisan and its cooperation is free of discrimination.' The biggest role of the organization, however, has been to continue to raise the issues related to child rights and child poverty. This role has certainly been well-performed by UNICEF over time. A solid testimony of its role is that when the United Nations adopted the Millennium Development Goals (MDG) agenda, there were 13 indicators of progress out of a total of 48 that were directly related to issues of child rights and poverty. Therefore, it can be fairly concluded that it was only possible due to the efforts of UNICEF. Another major contribution of UNICEF as an organization has been that through its research and publications like State of the World's Children reports, it has been effectively able to influence the discourse on public policy centered on children in developing as well as developed countries (Schaaf, Development Organisations, 2013). The successful implementation of the United Nations Convention on Rights of the Child also became a major part of the operations of UNICEF since 1989. All the averments made till this point clearly establish that the UNICEF is arguably the most influential organization in the world as far issues related to child rights are concerned and by extension, its arms have also expanded to include issues related to families as well as education.

With this background, it is now appropriate to get down to the analysis of the impact of UNICEF as an organization. As stated earlier, the limited participation of the youth in the functioning of organizations like UNICEF has been the biggest let down as far as its performance is concerned. Now, to undertake such an analysis, it is immensely important to undertake some literature review. The literature review guided a lot on enhancing the understanding of different factors and perspectives to be taken up in implementing this research. However, an exhaustive analysis was difficult because of the amount of material present and published over the years. In this regard, the following paragraph has focussed on the same subject.

A report published by The Association of Chief Police Officers, UK was analysed (Children & Young People Strategy 2010 –2013, 2013). The above report was evaluated to observe the current gaps in the Indian government's approach. A stark observation from this was the identification of gaps in implementing strategies to involve more youth in the policy-making processes, which are present between the state agencies of the developing and developed countries. The Association of Chief Police Officers, UK came up with an initiative called as the 'Children & Young People Strategy 2010 – 2013' in 2010 to capitalize on UK's demographic dividend being witnessed at that point in time. Many developed nations have understood that during a transition of an individual into a responsible citizen, the young crowd would eventually get in touch with state officials through multiple agencies.  Thus, it was considered inevitable for the state to improve this interaction in order to achieve benefits for themselves as well as the surrounding environment.  Also, these agencies from developed nations don't underestimate difficulties relating to daily interactions between the youth and state. The state should also realize to not undermine the youth because of actions from a small section of the young crowd. It will need to be sophisticated enough to understand that these small sections are merely confrontationists. Nations that involve the young population in designing the policies have reported higher efficiencies because the youth contributes its energy and enthusiasm in working towards addressing key issues that affect their lives directly or indirectly.

Another major criticism that has been laid at the door of UNICEF has been that it has not been fully able to appreciate the entire perspective regarding child rights in total. There has been widespread criticism with regard to the incomprehensive nature of UNICEF's approach regarding child rights. Serious concerns have been expressed with regard to the inadequacies in the approach of UNICEF pertaining to the legal jurisprudence around child rights. Moreover, its role in the implementation of the fourth Millennium Development Goal to work towards reducing the infant mortality rate also has not been well received.

This picture of stark contrast that has been elaborated above presents a flavour of an organisation that, in spite of being one of the most important organisations across the world, has disappointed the children, because of the increased inequality over all these years. The worst part is that this inequality has indeed gone high at the time of the post-cold war.

This has been occurring at the time when most emerging economies are capitalizing on the advantages of the demographic dividend. The government's uninterested and a callous attitude toward the exclusion of youth in strategic decisions can be termed as a major reason for the current condition.