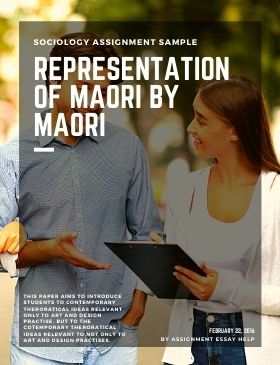 For further assistance in   Sociology Assignment help, please check our offerings in Sociology assignment solutions. Our subject-matter-experts provide online assignment help to entrepreneurship and marketing students from across the world and deliver plagiarism free solution with free Turnitin report with every solution.

This paper aims to introduce students to contemporary theroratical ideas relevant only to art and design practise, but to the cotemporary theroratical ideas relevant to not only to art and design practises.One of the key aims of this course is to raise awarness of the complex, multiple, heterogeneous ways of thinking that aboud today – and to cultivate students skills in navigating,crossing, mixing and interweaving these worlds in appropriate ways.

Smedley and Smedley (2005) provide the contemporary racial discussion on the basis of historical and anthropological background. As geneticists have advanced in showing us the facts of different races and sequenced the human genome, the psychologists have concluded by saying that the racism is continued as the Africans are viewed lower than the Europeans and Americans, which in turn viewed lower than the Asians and Asian descendants in the intellectual status (Jenson, 1974; Rowe, 2002). The authors provide earlier research evidence to point out the fact that race as a biology is fiction. There have been various arguments on this, and the debate suffered in the absence of enough scientific evidences. Whereas racism as a social problem is not fiction but real. It has been there in the society for a long time, and it still continues to be. Racism has got to do with the people who are living around, and it directly affects them with its vital consequences.

When the empires rose high, the remote geographical areas were taken care by the expansion of language and cultural features. The ancient empires such as the Egyptian, Greek, Roman and the Muslim empire dominated people whose skin colors and facial features were very different. Hannaford (1996) argues that until the 17th century, it was religion and language which became the most important criteria of identity. For example, during the Muslim empire the conversion from any other religion to Islam was forcibly done to people who were under the empire. The empire used to convert other religions such as Hinduism and Buddhism into Islam to match their identity with that of the empire. It was also done in order to protect the empire for people of their own religion would not normally go against them and would not cause harm to them. Africans were assimilated in Europe wherever they were found as history says.

Article 2: 'The Concept of National Cinema.'

Higson in his paper 'The Concept of National Cinema' tries to argue for the role of national in the national cinemas. He aims to explore the national in the discourse cinema. He generalizes his references of British cinema to at least those of Western European cinemas in presenting his points. Among the many possible explanations, national cinema can be defined in economic terms relating to the domestic film industry. It in turn concerns where and by whom these movies are made. Secondly, some key questions come into light as in what do these films tell us or do they have a common style. Owning and controlling the industrial infrastructures are also important points. It is often descriptive rather than prescriptive. The process of myth-making has been an indomitable responsibility of national film industry which is not just an ideological production but also setting an image and value against another image and value. Thus we see that what is 'national' here in our cinematic discourse becomes in turn the supplement of differences. It tries to establish the differences from other nations and cultures and tries to set up its own. The prevalence of a culture against the other can be easily credited to domestic cinemas. National cinema is the search for a unique identity which has its own meaning and value. Therefore histories of cinema can be understood in terms of histories of crisis and conflict (Higson, 1989,37). Cinema summarizes the history of a race and of a culture in this way.

He further describes that Hollywood does not function as under an equally weighted system; it has been successful in reflecting the natural part of national culture apart from being the most internationally powerful cinema. Hollywood can be scarcely be thought or taken as other for it has been integrated in the other national cinemas setting an example for them. It plays a double role by being a natural part of national culture as well as exotic. What we get to see here is the success of Hollywood movies lies in not only capturing what is national but also promoting them to other countries by setting parameters for others.