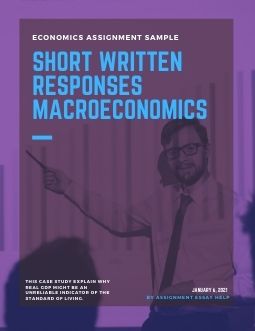 For further assistance in   Economics Assignment help, please check our offerings in Sociology assignment solutions. Our subject-matter-experts provide online assignment help to finance students from across the world and deliver plagiarism free solution with free Turnitin report with every solution.

Question 1: Explain why real GDP might be an unreliable indicator of the standard of living.

Question 3: Consider the following statement: ‘When the average level of prices of goods and services rises, inflation rises’? Do you agree or disagree? Explain.

Question 4: What is the aggregate demand (AD) curve and why does it slope downwards? Explain.

Explain why real GDP might be an unreliable indicator of the standard of living.

Real GDP is defined as the value of all commodities produced in an economy, measured with respect to the constant level of prices prevailing in a certain ‘base year’. Worded otherwise, Real GDP measures the total income of everyone in the economy (adjusted for the level of prices). (Mankiw 2014)

Real GDP is often used to gauge the standard of living of an economy. Sometimes, after being adjusted for Purchasing Power Parity, it is used to compare the standards of living across different economies (Cohn 2016). However, firstly, the measurement of Real GDP omits household production (King 2012). Second, even if in many parts of the world, the underground economy is a prime arena of economic activity, income generated therein is not reported in calculations of Real GDP. Third, important indicators of economic well-being – people’s health, life expectancy and valuation of leisure-time are not included in Real GDP computations (Parkin 2007). While a high life-expectancy raises economic well-being, a high valuation of leisure may lead to reduced production, lower Real GDP and reduced economic well-being. Fourth, Real GDP omits the effects of environmental degradation (Samuelson 2010). Consequently, a country may appear to be offering higher economic welfare (East European countries under communism) than another that grows slower, causing lesser environmental expense.  Finally, Real GDP calculations also omit the degree of political freedom and social justice enjoyed by a nation’s citizens (Nussbaum 2011). Thus, Real GDP may not be a reliable indicator of the standard of living of an economy.

Unemployment is a fundamental indicator of the health of an economy. When some active job-seekers within the labour force, cannot find employment, the economy is said to have some unemployment. According to the Australian Bureau of Statistics (ABS), the unemployment rate was 5.6% in August 2016 in Australia ((ABS) 2016).

Unemployment may arise due to:

A fundamental mismatch between the numbers of job-seekers and job-vacancies causes Structural Unemployment.  Labour Unions often fix wages beyond the equilibrium levels, culminating in some structural unemployment (Mankiw 2014). However, it is Frictional Unemployment and the resulting natural rate of unemployment that make some unemployment unavoidable in every market economy. Frictional unemployment is defined as unemployment, which results from time spent between jobs when a worker is looking for or transitioning from one job to another (Samuelson & Nordhaus 1989). Different workers have different abilities and preferences. Jobs too differ in their respective attributes. However, the flow of information in the labour market is imperfect. The geographic mobility of workers is also not instantaneous. Thus, it takes time to search for a job during which one is frictionally unemployed.