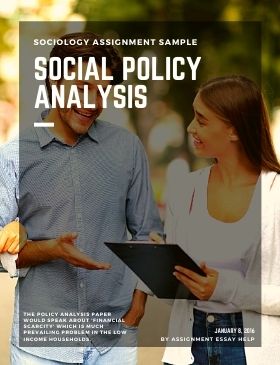 Choose a social issue, examine the policy and do a critical analysis.

The policy analysis paper would speak about 'financial scarcity' which is much prevailing problem in the low income households. This is a problem which directly or directly affects the entire global economy, the efforts are made by the Government to address the problem and to make low income households enable enough to survive and sustain.

One of the Schemes for enabling the low income population of the country is HOPE Scheme. HOPE stands for home ownership plus education. HOPE is a scheme for assistance run by the Ministry of Community Development, Youth and Sports.

The significance of the problem to social policy is well understood. Poverty or generation of low income is an extremely serious concern which needs to be addressed by any initiative. HOPE scheme is one such initiative which assists the low income households to get rid of their financial problem and scarcity and to put in their limited financial resources in some constructive affairs which bear fruitful results in future and they can have an improved standard of living. Such households are served with a direction to get out of the trap of poverty. The scheme provides assistance in targeted and comprehensive forms. The scheme has been initiated with an aim to support the low income households so that they get enabled to concentrate their limited income/ financial resources on their skills up gradation and education (HOPE Scheme).

Causes, Scope and Implications of the Problem

Poverty may also be termed as a state of financial crisis. The causes of this state may be many, such as changing trends in the economy of a nation, over sizing of population, etc. Low level of education may also be responsible for poverty.  There are various socioeconomic, psychological, political and cultural factors responsible for poverty. Poverty is a very serious problem, serious than any other disaster. This has been declared on the basis of the annual global poll which was conducted for the BBC world service. For this purpose, 23 countries were covered. In this poll, poverty was declared as an extremely serious global issue in ten of the countries which were chosen for the poll. These chosen countries included Australia, UK, Brazil, Chile, Kenya and US. As per the countries like Mexico, Nigeria, Indonesia, Turkey and Russia, the inflating cost of energy and food is a more serious problem which becomes difficult to be dealt with. This poll was conducted before the Copenhagen summit. In the poll, the respondents were asked to name the most important issue as per them, which affect the entire world. The spontaneous response of the respondents was 'poverty' (BBC World Service Poll). A glance at the statistics reveal that more than 3 billion people i.e. nearly half of the world, sustain on less than $2.50 a day. The children living in poverty are 1 billion. 1 Billion children mean 1 in 2 children all over the world. Those living without shelter comprise of 640 million of the total global population. There is no access to safe water to 640 million and 270 million of them do not get proper medical services (Statistics of Poverty).

I order to eradicate the problem of poverty the HOPE scheme has been initiated. The scheme aims to provide many benefits to the low income families. It also helps those who choose to keep their families small. The families / households,who receive benefits of the scheme, remain committed to keep their families small. In addition, they invest their limited income/ resources in upgrading their skills and education and this way, they achieve self- reliance. This self- reliance is made possible because of this scheme (Aims of HOPE Scheme).The families having a total household income of $1500 or less per month are eligible to avail the benefits of this scheme.Family in which wife/ mother ages below 35 years and is married with one or two children, are also eligible for this scheme. The husband in the family/ household must be employed. Either husband or wife should essentially be a citizen of Singapore and the spouse should either be a citizen of Singapore or a permanent resident of Singapore. In nutshell, one spouse at least, should have had post-secondary education and neither of them should be earning more than $1000 in a month (Eligibility for HOPE Scheme).

This scheme has been a great initiative which not only supports the low income families/ households but also enables them for self-reliance.It strengthens their position in the community and prepares them to face future challenges along with strengthening the economy of the nation by making such an effort. The families are given incentives also to keep their families small which brings about two advantages. One, the size of population is tried to be keep balanced and secondly, the low income families are enabled for investing their much limited incomes and resources in their own up gradation and for the welfare of their families. This scheme has turned…….