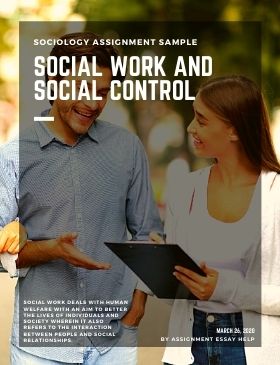 The focus of the essay is on one of the topic areas. The topic areas include:
• Values
• Ethics
• Roles and Levels of Practice
• Practice Standards
• Practice frameworks
• Social work and social control (also includes concept of ‘deservingness’)
• Critical and Reflective practice
The task is to demonstrate an understanding of the topic area, and critical analysis of it in the context of Social Work /Human Services,  i.e. why is it important to know about this, what challenges might arise. You can narrow the focus down to look at an aspect of the topic, eg  look at a couple of ethical principles like confidentiality and duty of care.  Or eg how deservingness criteria impacts work with people with a disability.

Social Work deals with human welfare with an aim to better the lives of individuals and society wherein it also refers to the interaction between people and social relationships. The field of social work does not focus on individuals but tries to derive a link between people and different contexts of their lives. There are many individuals who are not able to maintain such relations with their social aspects because of several reasons, which makes their lives difficult and leads them to suffer physically, emotionally, historically and socially. Social workers try to uplift such people and enrich their lives through a strategical intervention that is not only helpful at that point but sustainable as well (AASW, 2013). However, in spite of helping people and keeping care at the center of their hearts, social workers have also witnessed a lot of criticisms against them, which has made them vulnerable to attacks and questions from people. It is often pointed out that social work does not help people, but degrades society by focussing too much on social control. This is due to the fact that there has been a lot of confusion over ‘care’ and ‘control’ in the field of social work. Since social workers help the marginalized sections with care but also try to form social control in their social circle or the society for the long term. Thus, whatever care is provided does not sustain which has led to the assumption that strategical and control cannot go hand- in- hand (Appelbaum,L., 2001).
In this academic essay, the implication of deservingness is taken into account to understand the role of social work and social control properly………………………